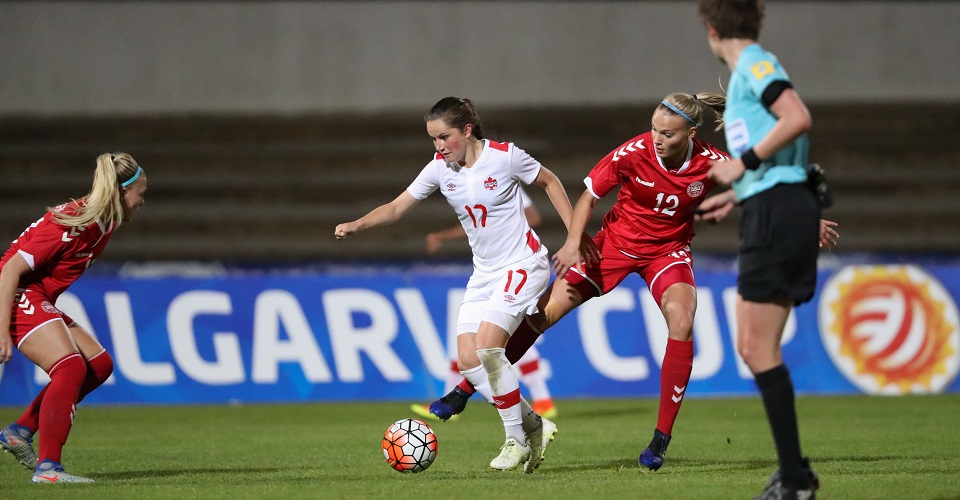 Canada will face stiff competition in the group stage of the 2018 Algarve Cup, the prestigious annual international women’s soccer tournament in Portugal. Canada is in […]

Canada will face stiff competition in the group stage of the 2018 Algarve Cup, the prestigious annual international women’s soccer tournament in Portugal. Canada is in Group B alongside Sweden, Russia, and Korea Republic in the 12-nation tournament that runs 28 February to 7 March.

The Algarve Cup will kick off Canada’s 2018 international season, with a recently-announced home match against Germany on 10 June in Hamilton, an important date on the calendar. Canada will play four matches at the Algarve Cup through 7 March and then an away international on 9 April against France, hosts of the next FIFA Women’s World Cup™ in 2019. At home on 10 June, the number-five Canadians will face the number-two ranked Germans at Tim Hortons Field.

“We are looking forward to some great matches in the group stage at the 2018 Algarve Cup,” said Kenneth Heiner-Møller, Canada Soccer’s Women’s National Team Head Coach. “We don’t yet know what team we will face in the last match, but there is a lot of quality in this tournament so we are certain our final match will also be a good one.”

This marks the first time the full Women’s National Team has been together in 2018 and they have had just over a week in preparation for the opening match at the Algarve Cup.

“When we arrived here there was a little rust that had to be shaken off, but we’ve taken care of that,” said Heiner-Møller. “We are working heavily on solidifying partnerships so that when the players step on to the pitch they will be prepared for what their role is, and within their positional partnerships.”

At the Algarve Cup, Canada will face Rio 2016 Olympic silver medalists Sweden on 28 February with a 19.00 local kick off at Bela Vista Municipal Stadium (14.00 ET / 10.00 PT). International matches between the two nations have been close in recent years, with Canada winning the most recent encounter 1:0 on 6 April 2017.  In the last 10 international meetings since 2006, Canada have posted a record of five wins, two draws, and three losses against Sweden.

In 2017, Sweden posted an international record of eight wins, four draws, and six losses in 18 matches while also reaching the quarter-final stage of UEFA Women’s EURO in Netherlands.

Canada’s second match is against Russia on 2 March with a 19.00 local kick off at Estádio Algarve (14.00 ET / 10.00 PT). The two sides met on the same grounds one year ago, with Christine Sinclair supplying the winning goal of a 2:1 victory. All time, Canada have posted a record of three wins and one loss in four matches against Russia since 1999.

In 2017, Russia posted an international record of four wins, one draw, and 11 losses in 16 matches. Amongst the 16 nations competing at UEFA Women’s EURO 2017, Russia were eliminated in the group stage behind Germany and Sweden.
“It feels great to be back with the National Team: we are sisters and we have a really tight bond with each other,” said Kadeisha Buchanan, who was the Best Player at the Algarve Cup in 2016.  “We are coming together from different environments, whether that’s with our professional teams in Europe or North America, so it’s really good to get back together and begin to gel. I think that’s key for us as a team.”

Canada’s final group stage will be against Korea Republic on 5 March with a 15.00 local kick off at Estádio Municipal de Lagos (10.00 ET / 07.00 PT). To date, Canada have posted a record of six wins and one loss in seven matches against Korea Republic, but the last two matches in 2015 were both one-goal victories.

In 2017, Korea Republic posted an international record of five wins, two draws, and six losses in 13 matches. Korea Republic are gearing up for their AFC Women’s Asian Cup in Jordan in the month of April.

Beyond Canada’s home match in Hamilton this June, Canada are ultimately preparing for this year’s qualification phase to the FIFA Women’s World Cup France 2019™. Canada will compete in the 2018 CONCACAF Women’s Championship from 4 to 17 October from which the top-three nations will all qualify for France 2019 while the fourth-place nation will advance to an intercontinental playoff against the third-place nation from South America.

“With FIFA Women’s World Cup Qualifiers coming up, getting more tournament experience and expertise from this event, for both the players and staff, is really a focus and objective,” said Buchanan. “The process of getting better as a team with each game is our main focus at the Algarve Cup.”