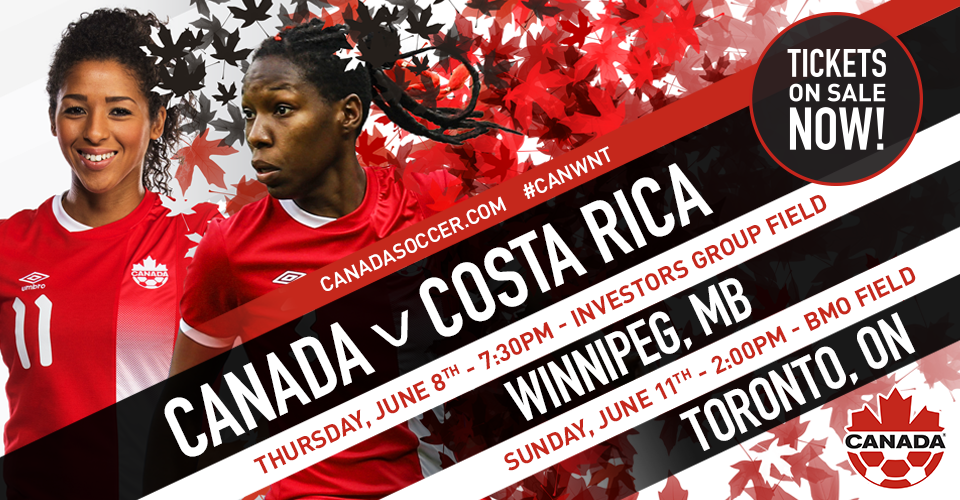 Canada Soccer’s Women’s National Team will return home to play Costa Rica in Winnipeg 8 June and Toronto 11 June. The matches will mark the first meetings between the two nations since Canada defeated Costa Rica in February 2016 at the CONCACAF Olympic Qualifying Tournament, securing Canada a spot at the 2016 Rio Olympic Games.
“Getting to play in front of Canadian fans is really special, so we are obviously thrilled to be coming home for another June two-match series,” said Head Coach John Herdman. “We’ll be coming off away games against both Sweden and Germany, Olympic Silver and Gold medalists respectively, so we’re confident the team will be in good shape to produce a winning performance for both sets of fans.”
The matches against the second-ranked Germans and sixth-ranked Swedes marks the start of a new cycle for the Women’s National Team. Competition against the Gold and Silver medalists from the Rio 2016 games will set Canada toward a new goal, who reached number four in the world post-Olympics, to be the top nation in the FIFA rankings.
“We are thrilled that the Women’s National Team will get to play in front of hometown fans as they begin their quest to be the top ranked team in the world, culminating at the 2019 Women’s World Cup and the 2020 Olympic Games,” said Peter Montopoli, Canada Soccer General Secretary. “For many players, including Desiree Scott in Winnipeg, and several of our Toronto area players, there will be an added motivation to perform in front of hometown fans.”
Canada last played in Winnipeg in 2014 against the USA resulting in a 1:1 draw. Kadeisha Buchanan gave the 28,255 fans on hand something to cheer about as she opened the scoring in the first half, but the Americans tied the game with fifteen minutes to go to draw 1:1. At the time, the attendance in Winnipeg was the second highest for a Canadian ‘A’ level women’s international played in Canada.
Toronto fans last saw Canada in action against Brazil as part of the Road to Rio series in June 2016 as Canada prepared for the Rio 2016 Olympic Games. Canada fell to Brazil in that match 0:2 but came back and defeated them 1:0 in Ottawa three days later, and then 2:1 when it mattered most in the Bronze Medal Match of the Rio Olympic Games.
“We’re looking forward to coming back to Winnipeg and Toronto,” Herdman said. “For the Toronto crowd especially, we want to deliver for the fans, they always come out and support us but we’ve yet to deliver a win for them. Rest assured we’ll be doing everything we can in the preparation to make that happen.”
In celebration of International Women’s Day, individual tickets to the Canada v Costa Rica matches on will go on sale to the public on Wednesday, 8 March at 10:00 local time via Ticketmaster.ca. The launch of ticket sales will be preceded by a presale for Canada Soccer Insiders and past purchasers of Canadian National Team matches. Fans interested in receiving access to the presale offer for these matches are encouraged to subscribe to the #CanadaRED newsletter via canadasoccer.com
Ahead of the launch of the individual ticket sale phase, Groups of 10+ will have access to an exclusive advance window starting on Tuesday, 21 February and running through Friday, 3 March. All group orders received by 3 March will be processed ahead of the individual ticket sales phase. Groups of 10 or more are eligible to receive up to 30% off regularly priced tickets – for complete group ticket information and to place your order today visit the group ticket info pages (Winnipeg | Toronto). The group ticket program will continue to be offered during the individual ticket sales phase.
Complete ticket information can be found at CanadaSoccer.com/Tickets.