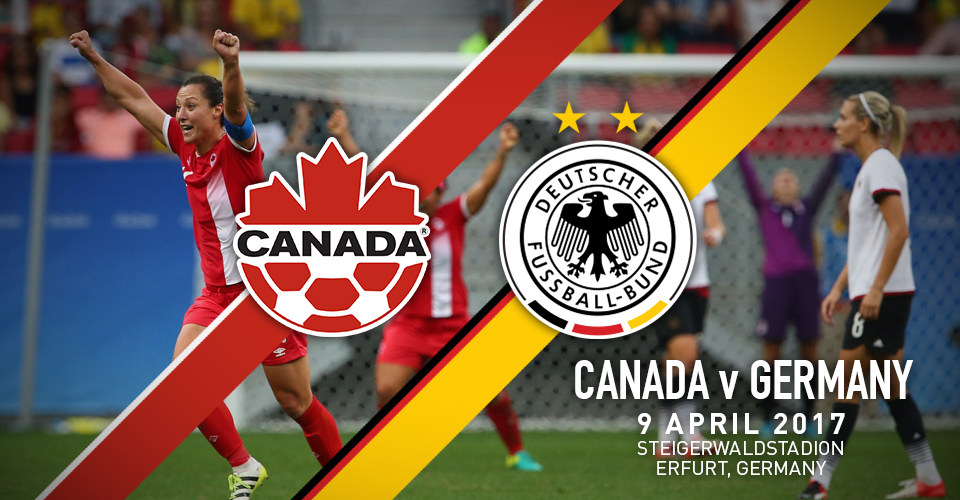 As Canada Soccer’s Women’s National Team gear up for the Bronze Medal Celebration Match against Mexico in Vancouver 4 February, Canada Soccer is already planning for its next match, announcing the team will play Olympic gold medalist Germany in Erfurt, Germany on 9 April 2017.
Canada and Germany clashed twice at the Rio 2016 Olympic Games, with Canada winning the first encounter in its third group stage match 2-1, and Germany edging out Canada in the semi-final to play Sweden for gold while Canada went on to defeat Brazil in the bronze medal match.
Canada’s come-from-behind group stage win over Germany, its first-ever result against the European champions, continues to feature in the public’s memory of the Rio Games and for Head Coach John Herdman, it’s his favourite moment of the tournament.
“It was just such a great moment for our team, beating the European Champions and securing first in our group, but for me watching the performance of Melissa Tancredi, who some people had written off in 2015, it was a moment I will never forget,” said Herdman. “She put everything out there and showed the world what she is all about. It was fantastic.”
Tancredi, wearing the captain’s armband, scored on both sides of the half-time whistle. Down 0-1 after Melanie Behringer successfully converted a penalty shot, Tancredi equalised in the 25th minute after faking out the defenders and driving a left-footed strike at the top of the box. She then put Canada up 2-1 with a header off a long free kick from Rebecca Quinn in the 60th minute.
Canada’s Olympic performance earned it the position of fourth in FIFA World Rankings, up from ninth the previous year. While this is the highest position Canada has ever held, Herdman’s team has promised there is more to come.
“We want to take this team from fourth to first and the only way to do that is to consistently play tier-one, world-class teams like Germany,” said Herdman. “We’ve made a commitment to play the best and this match in April will give us an opportunity to test ourselves against the best in the world. Canada Soccer has made incredible strides over the last four years, earning back-to-back podium finishes, and we are ready to show the world we are a soccer nation by beating the best, and becoming the best.”

Fans will get one last opportunity to see Melissa Tancredi, the star of Canada’s first ever victory over Germany, when she plays her final match for Canada in the Bronze Medal Celebration match 4 February at BC Place. Along with defenders Rhian Wilkinson and Marie-Eve Nault, Tancredi announced last week that they will be retiring from international play.

Individual tickets to the Canada v Mexico match are on sale via Ticketmaster.ca. Tickets to the match start as low as $20 (plus applicable fees) and fans will once again be able to take advantage of a ‘Me+3’ offer in select sections.