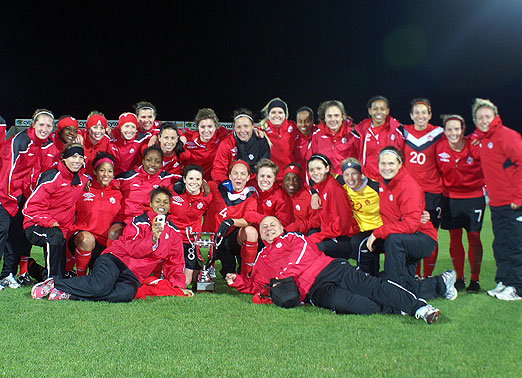 12 teams to compete in annual competition in Cyprus.

The fifth edition of the 2012 Cyprus Women’s Cup kicks off this 28 February in Larnaka, Nicosia, and Paralimni, Cyprus. For the second year in a row, 12 teams will compete in the women’s international competition organized by the football associations of Scotland, Netherlands and England. All 12 teams will play four matches from 28 February to 6 March.

The 12 teams are split into three groups, with winners of the first two groups eligible to compete in the championship match on 6 March. Canada has won three of the four previous editions of the Cyprus Women’s Cup, including each of the last two against Netherlands (2011 final) and New Zealand (2010 final).

This year’s Cyprus Women’s Cup features four teams that competed in last year’s FIFA Women’s World Cup Germany 2011. Of the 12 teams in Cyprus, 10 of them are returning from last year’s competition. Last year’s competitors Mexico and Russia are replaced by debutant Finland and returning nation South Africa. Since 2008, fifteen different national “A” teams have participated in the annual Cyprus Women’s Cup.