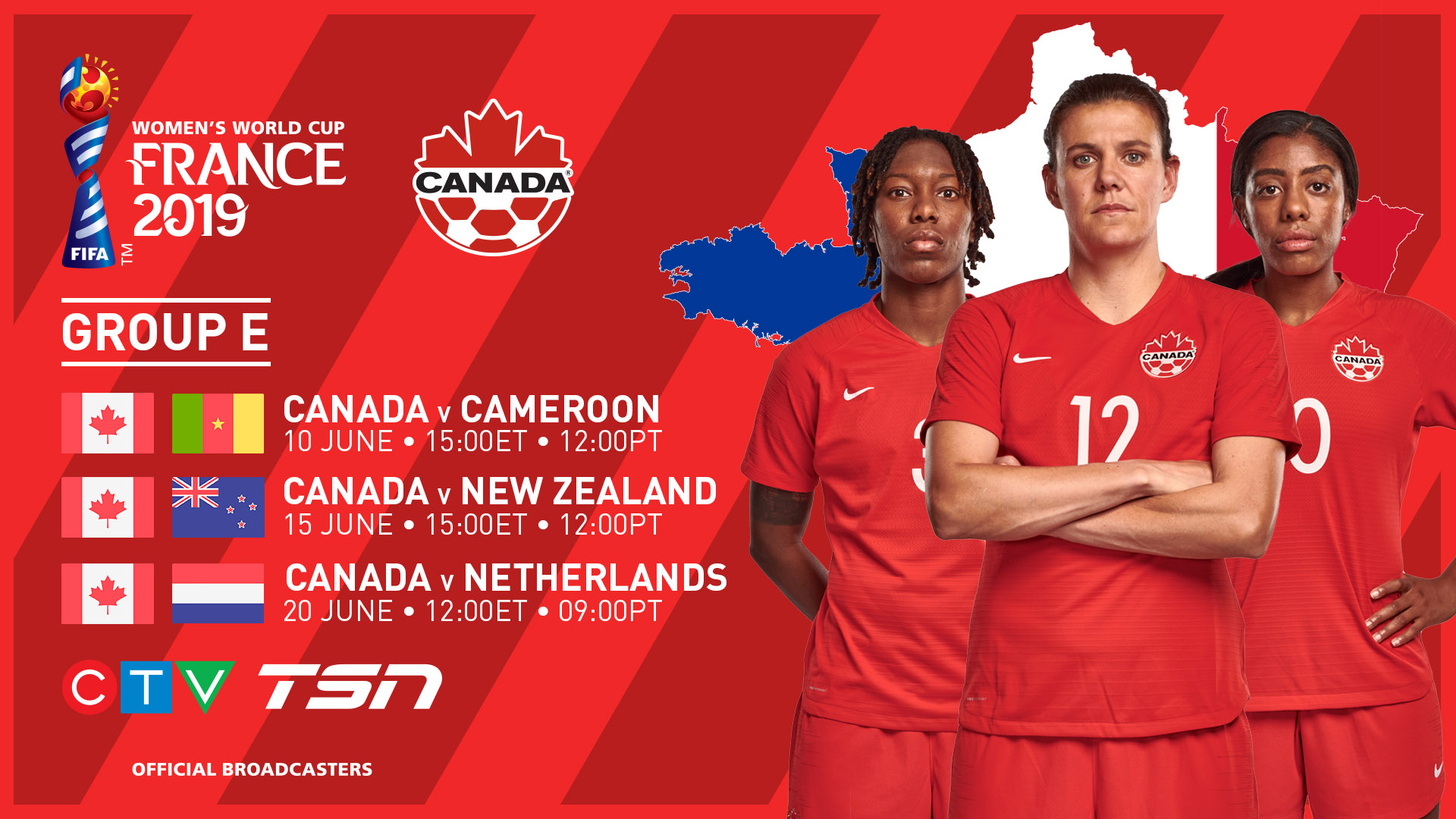 Canada will face Cameroon, New Zealand and Netherlands in the group stage of the FIFA Women’s World Cup France 2019™. Canada are handing off the competition to […]

Canada will face Cameroon, New Zealand and Netherlands in the group stage of the FIFA Women’s World Cup France 2019™. Canada are handing off the competition to France having hosted the most recent edition in six Canadian cities from coast to coast in 2015 when a record 1.35 million fans attended the competition.

“FIFA Women’s World Cup Canada 2015™ marked a watershed moment for the sport in our country with record setting attendance and global viewership figures,” said Canada Soccer General Secretary Peter Montopoli, who was the CEO of the National Organizing Committee for the FIFA Women’s World Cup™ Canada 2015. “Four years later, we look to build on our historic performances on the field and pass the hosting baton to the France organizing committee.”

Seeded in Pot A, Canada Soccer’s Women’s National team were drawn into Group E at the Official Draw held on 8 December 2018 in Paris, France. Canada have most recently been ranked fifth in the FIFA Women’s World Rankings and finished second at the 2018 Concacaf Women’s Championship in October.

Canada’s campaign will begin on Monday 10 June when they face Cameroon at Stade de la Mosson in Montpellier, France. Canada will then travel to Grenoble for their second group match on Saturday 15 June against New Zealand at Stade des alpes. Canada then conclude the group phase in Reims on Thursday 20 June with a match against Netherlands at Stade August-Velaune.

“We are excited and really looking forward to the tournament, especially now that we know who we will face in the group stage,” said Kenneth Heiner-Møller, Canada Soccer’s Women’s National Team Head Coach.  “There are quite a few nations here that could win it and Canada are certainly one of them. We are confident and have shown that we can beat the best on the world stage, so we are now focusing primarily on pushing and challenging ourselves throughout the first half of 2019, then fine tuning in preparation for the FIFA Women’s World Cup France 2019™ next summer.”

“We are excited & really looking forward to @FIFAWWC, especially now that we know who we will face in the group stage. There are quite a few nations here that could win it & Canada are certainly of them.”
Kenneth Heiner-Møller
https://t.co/Ko8TO7hmBe#CANWNT #FIFAWWC pic.twitter.com/DgpXaBxgri

Canada’s opponents
Canada will face two familiar foes at France 2019 after previously facing both New Zealand and Netherlands in the group stage at Canada 2015. The opening match against Cameroon, meanwhile, will be the first-ever encounter between the two nations. Canada have a record of six wins, four draws and one loss in 11 international matches against New Zealand and nine wins, three draws in 12 international matches against Netherlands.