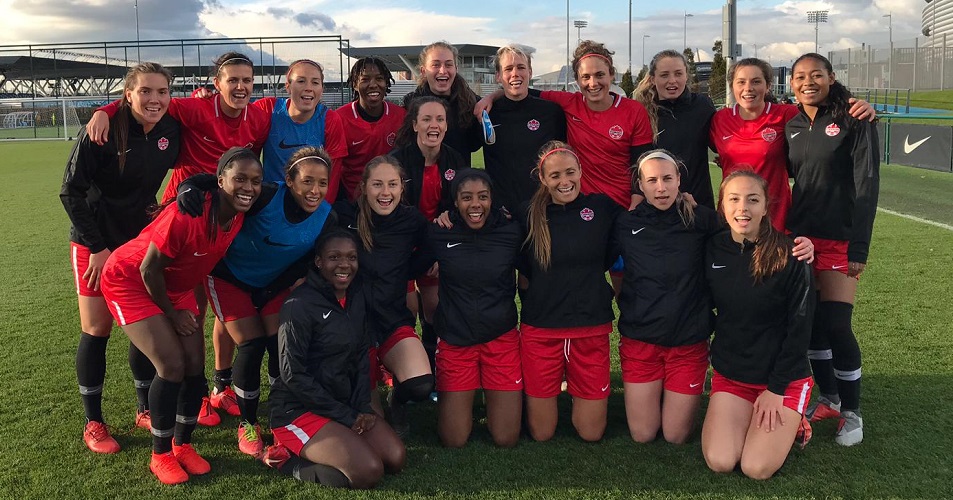 Canada will face England in a rematch of the FIFA Women’s World Cup Canada 2015™ Quarterfinals and then face Nigeria three days later as all three teams make their final preparations ahead of France 2019 this summer. The Canada-England match will be played this Friday 5 April in front of a sold-out crowd at the Academy Stadium in Manchester, England.
Canada’s Friday match will be broadcast live in Canada on CanadaSoccer.com and TSN.ca at 14.00 ET / 11.00 PT (19.00 local). With Canada and England both holding top-five spots in the FIFA/Coca-Cola Women’s World Rankings, the match is expected to showcase the same kind of intensity that will be on display this summer at the FIFA Women’s World Cup™. For additional behind-the-scenes coverage, fans can follow Canada Soccer’s National Teams across their digital channels on Facebook, Instagram, Twitter, and Youtube.
“We’re going to approach this match as if we are playing a World Cup match,” said Kenneth Heiner-Møller, Canada Soccer’s Women’s National Team Head Coach. “While England are not in our group, we could face this kind of opponent soon after the group stage. England are ranked third in the world, so we are looking forward to this opportunity to test ourselves and see where we are at against top teams. We’ve been improving throughout the year, so we are excited about this great test ahead of the FIFA Women’s World Cup.”

Many of Canada’s current players were part of that Canada squad that faced England at Canada 2015, played in front of a record crowd of 54,027 at BC Place in Vancouver.

“Some of the players are approaching this match as a rematch for sure,” said Heiner-Møller. “When we spoke about the last FIFA Women’s World Cup as a team, we reflected on that match. Our players were either participating or they were watching, so even if they were not on the pitch back in Vancouver, they still feel the intensity of this being a rematch in 2019. This match is more than just a rematch as it is also one of the last preparatory matches for us. It’s a huge opponent for us, so we are hoping for a good, tight match that hopefully we will win.”

“We have been looking for a strong African opponent ever since we drew Cameroon in the group stage of the FIFA Women’s World Cup,” said Heiner-Møller. ”This is a great opportunity for us to better understand the style and how to play around it.”
Nigeria are 11-time African champions and have qualified for all eight editions of the FIFA Women’s World Cup™.
Canada Soccer Send-Off Home Match
Canadians will have an opportunity to see Canada Soccer’s Women’s National Team at home before the FIFA Women’s World Cup™ when they play their Send-Off match against Mexico in Toronto at BMO Field on 18 May. Tickets are available via Ticketmaster.ca starting as low as $20. A special ‘Me+3’ ticket offer is available for this match. By purchasing three tickets in Price Category 2, fans will receive the fourth one free. Fans can visit canadasoccer.com/tickets for complete ticket information..

FIFA Women’s World Cup France 2019™ Group Stage
Canada will launch their FIFA Women’s World Cup™ campaign against Cameroon on Monday 10 June at Stade de la Mosson in Montpellier, France. Canada will then travel to Grenoble for their second group stage match on Saturday 15 June against New Zealand at Stade des alpes. Canada then concludes the group phase in Reims on Thursday 20 June with a match against the Netherlands at Stade August-Velaune.

At the last three major women’s tournaments, Canada finished third at the London 2012 Women’s Olympic Football Tournament, sixth at the FIFA Women’s World Cup Canada 2015™, and third at the Rio 2016 Women’s Olympic Football Tournament.
About Canada Soccer
Canada Soccer, in partnership with its membership and its partners, provides leadership in the pursuit of excellence in soccer, both at the national and international levels. Canada Soccer not only strives to lead Canada to victory but also encourages Canadians to a life-long passion for soccer. For more details on Canada Soccer, visit the official website at canadasoccer.com.