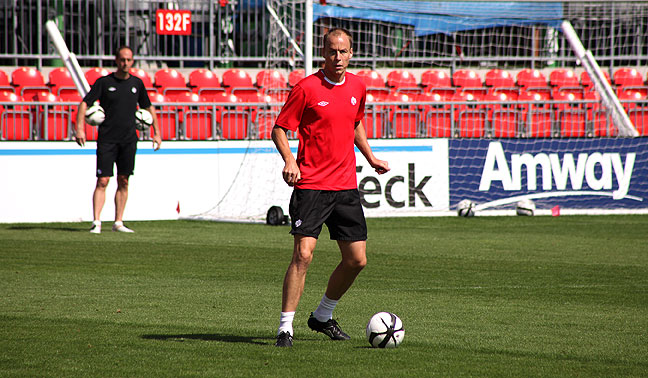 Canada to face Panama on Friday at BMO Field

Canada will look to take advantage of a partisan home crowd when it faces Panama in FIFA World Cup Qualifiers this Friday 7 September 2012 at BMO Field in Toronto. The Canadian team will host Panama on Match Day 3 of the CONCACAF 3rd Round with a 19.30 local kick off.

“I think the support is going to be fantastic,” said Canadian head coach Stephen Hart. “There is a lot of buzz about this game. The last few home games had an excellent crowd. I think we are going to see a sea of red come game day.”

The Canada-Panama match will also be broadcast live across the nation on Sportsnet One. The broadcast kicks off at 19.00 ET / 16.00 PT. As part of the pre-match ceremony, Canada will pay tribute to the women’s national team that recently won a bronze medal at the London 2012 Women’s Olympic Football Tournament.

CANMNT: Canada head into Panama clash with ‘spirit and belief’

Twelve teams are participating in the CONCACAF 3rd Round of the 2014 FIFA World Cup Brazil Qualifiers, including group opponents Canada, Cuba, Honduras and Panama. Only two teams from each group advance to the CONCACAF Final Round in 2013. The six-match semi-final round runs June through October, with Canada’s next two matches (both against Panama) scheduled for 7 September in Toronto and 11 September in Panama.

After two matches in June, Panama holds first place with six points, Canada stands in second place with four points, Honduras sits in third place with one point, and Cuba holds last place with no points.

Tickets to Canada-Panama match on 7 September is available via ticketmaster.ca or by phone at 1.855.570.7500, with full information available on CanadaSoccer.com. Group discounts are available via marketing@soccercan.ca or 613.237.7678. Following the Friday 7 September match against Panama at BMO Field, Canada’s next home match is Friday 12 October against Cuba. Canada’s remaining away dates are Tuesday 11 September in Panama and Tuesday 16 October in Honduras.