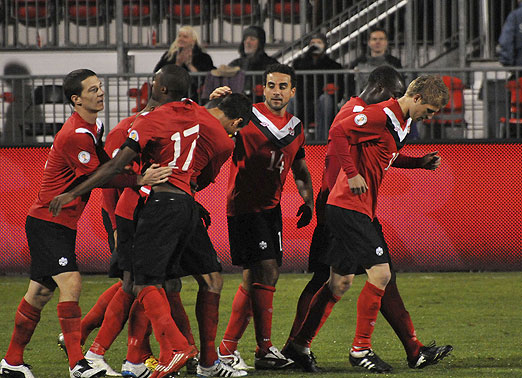 Canada has announced that it will play four matches – a special Centenary match and three FIFA World Cup Qualifiers™ – at BMO Field in Toronto this 2012 season. The announcement was made on Thursday 2 February as part of the Canadian Soccer Association’s 2012 Umbro Kit Launch in downtown Toronto.

Canada will face USA on 3 June in a Men’s International Friendly match as part of the Canadian Soccer Association’s 100th anniversary celebrations. The team will also play FIFA World Cup Qualifiers at BMO Field on 12 June against Honduras, 7 September against Panama, and 12 October against Cuba. Ticket packages will go on sale this Friday 13 April at 10.00 via Ticketmaster (ticketmaster.ca / 416.872.5000).

“2012, the Canadian Soccer Association’s centennial year, is a crucial season for our team as we continue towards our goal of qualifying for the 2014 FIFA World Cup Brazil™,” said Stephen Hart, Head Coach of Canada’s Men’s National Team. “We will need the full support of the Canadian soccer community as we work towards the collective goal of reaching a FIFA World Cup™.”

Matches in Toronto will be played on grass at BMO Field. While in the Toronto area, the Canadian team will also make use of the grass soccer training grounds at Nottawasaga Inn in nearby Alliston, ON.

Canada plays six matches this year in CONCACAF Round 3 of the 2014 FIFA World Cup Brazil Qualifiers™, with three at home and three on the road. Only two teams from the four-team group will advance to CONCACAF Round 4 in 2013. Canada plays abroad on 8 June in Cuba, 11 September in Panama and 16 October in Honduras.

The send-off match on 3 June 2012 helps the Canadian Soccer Association celebrate its 100th anniversary. The Association’s first official home international match was played against USA back on 27 June 1925 at Alexandra Park in Montréal. The two CONCACAF neighbours next faced off in Canada’s first-ever FIFA World Cup Qualifiers match on 22 June 1957 – a historic 5:1 win for Canada at Varsity Stadium in Toronto.

In all, the two sides have met each other 10 times at the international “A” level in Canada, with the most recent meeting on 9 November 1997 at Swangard Stadium in Burnaby, BC (1998 FIFA World Cup Qualifiers™). In those 10 matches, Canada boasts a record of six wins, one draw and three losses against USA in Canada (including two wins in two matches in Toronto).

In advance of Canada’s 2012 home fixtures, Canada will kick off the 2012 season on 29 February in Limassol, Cyprus against UEFA opponent Armenia. Canada will wear the 2012 Umbro kit for the first time in that away Men’s International Friendly match.