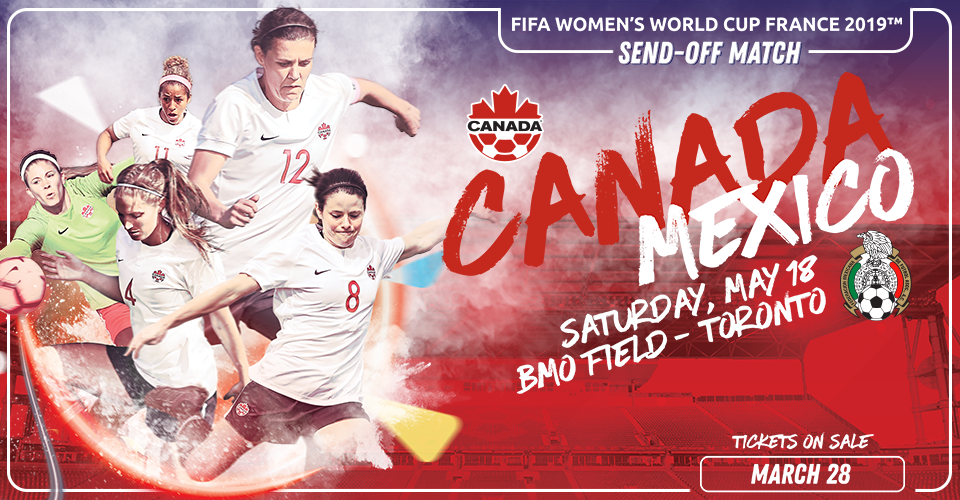 Canadians will have the opportunity to see Canada Soccer’s Women’s National Team live in action before the team departs on its mission to bring home the top prize in women’s football – the FIFA Women’s World Cup trophy.  Canada will face Mexico on Saturday 18 May at BMO Field in Toronto, ON at 13:00 ET/10:00 PT.

Tickets for Canada’s final pre-World Cup home match start at $20 and go on sale to the public on Thursday 28 March at 10.00 ET / 07.00 PT via Ticketmaster.ca, and by phone at 1.855.985.5000.  The launch of public ticket sales will be preceded by a 24-hour presale offer for Canada Soccer Insiders. Ahead of the launch of the individual ticket sale phase, Groups of 10+ will have access to an exclusive advance window starting on 26 March. For complete ticket information and to submit a group ticket order visit canadasoccer.com/tickets.

“Playing at home in front of our Canadian fans ahead of major tournaments are some of my favourite games, so there is no better way for us to make our final preparations for the (FIFA Women’s) World Cup than to play on home soil against Mexico, a long-time rival of ours,” said Diana Matheson. “We’ve been working incredibly hard for months to prepare and the momentum of a home match and the support of our fans will make a huge difference as we prepare to head to France.”

The home fixture against Mexico will be Canada’s seventh match of 2019. Canada is undefeated in the five matches they have played to date, with three wins and two draws without conceding a single goal.

Canada defeated Norway 1-0 in an international friendly and tied Switzerland 0-0 in a training match in Spain in January. At the recent Algarve Cup, Canada drew Iceland 0-0 before defeating Scotland 1-0, and overcoming Sweden 6-5 on penalties to earn third place in the tournament. Canada’s sixth fixture will be an international friendly against England, the recent winners of the 2019 She Believes Cup, in Manchester, UK on 5 April.

“Our plan has been to build throughout 2019 so we are ready to peak in June.  We’ve learned from each of the matches we’ve played so far and we’ve put several structures on the pitch as we refine our skill set for France.  We are eager to get out in front of our home fans,” said Head Coach Kenneth Heiner-Moller.   “The players are really looking forward to seeing the fans cheering us on and hopefully we will put on a show, but, very importantly for us it will be exhilarating and surely give us more momentum as we head to France.”

Canada and Mexico may have faced each other 23 times, but the continental Concacaf rivals have not seen action against each other since Canada bested Mexico 3-2 in Canada Soccer’s Rio Bronze Medal Celebration match early in 2017.  Mexico failed to reach the semi-finals of the 2018 Concacaf Women’s Championships and an opportunity to qualify for the FIFA Women’s World Cup despite having made appearances in the competition in 2011 and 2015.

The special ‘Send-Off’ match will mark the debut of Canada Soccer’s Women’s National Team in their new Canada Soccer NIKE home kit on home soil following its unveiling two weeks ago in France.

Canada will kick off the FIFA Women’s World Cup France 2019 on Monday 10 June when they face Cameroon at Stade de la Mosson in Montpellier, France. Canada will then travel to Grenoble for their second group stage match on Saturday 15 June against New Zealand at Stade des alpes. Canada then conclude the group phase in Reims on Thursday 20 June with a match against Netherlands at Stade August-Velaune.

Individual Tickets
Tickets for Canada’s final pre-World Cup home match start as $20 and go on sale Thursday 28 March via Ticketmaster.ca, and by phone at 1.855.985.5000.

Group Tickets
Group discounts (10+ tickets) are available for this match, by organizing a group of 10 or more, you are eligible to receive a discount of up to 30% off regular priced tickets. The group ticket order window is now open.
To submit your request, complete the group order form indicating the price point and quantity of tickets you are wishing to purchase here: Group Order Form

Following the submission of the online form, you will be contacted to confirm payment details and complete the processing of tickets.
Ticket orders will be processed on a first come, first serve basis so organize your group, club, or team today.
Me + 3 Offer
A special ‘Me+3’ ticket offer is available for this match. By purchasing three tickets in Price Category 2, fans will receive the fourth one free. The ‘Me+3’ ticket packages can be purchased directly via Ticketmaster.ca. Please note Me+3 is only available at the start of public on sale, 28 March.

Canadian Supporters Section
Canadian supporters, led by the Voyageurs, have been allocated a number of dedicated sections in the South stands at BMO Field.
For more information on the Canadian Supporters please visit www.thevoyageurs.org.
Please note that persistent standing will be permitted in these sections.