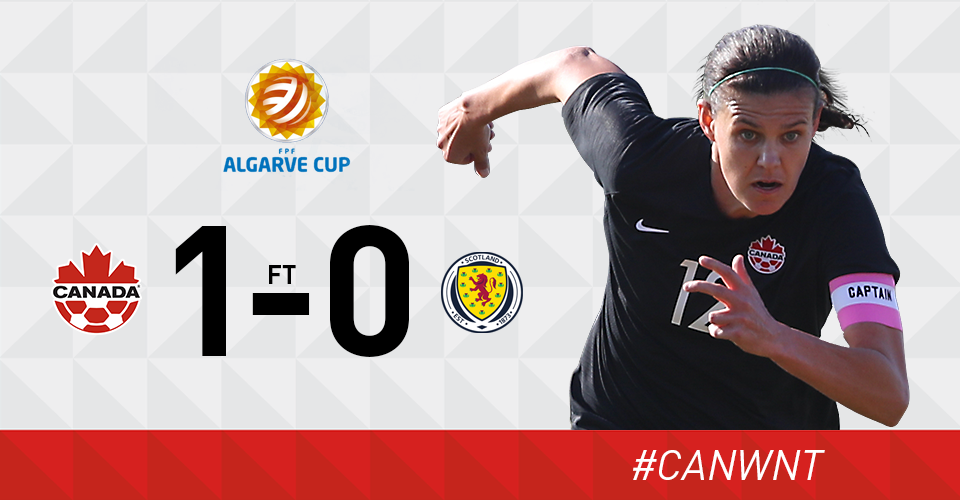 Canada Soccer’s Women’s National Team defeated Scotland 1:0 and earned three points, for a total of four over two matches at the 2019 Algarve Cup. Captain Christine Sinclair converted a penalty for her 179th International goal, leaving her five away from the all-time Women’s International goal scoring record. Canada will play a third and final match of the 2019 Algarve Cup on 6 March to determine its final rank in the tournament.

“It’s about players stepping up and finding a way, like that pass from Sophie to Ashley and her taking the fullback on one-on-one, and Sincy putting it in.” said Women’s National Team Head Coach Kenneth Heiner-Moller. “We adapted very well after the 25’ and got it right. The entire second half defensively was good. This is the third international match in a row that we have a clean sheet.”

Canada started the match with a high press that led to Ashley Lawrence forcing a mistake from a Scottish defender which Christine Sinclair pounced on leading to a spell of Canadian possession. Ashley Lawrence put Christine Sinclair through on goal in the 35’ and with a defender pressing hard, Sinclair got the shot off but it was over the net. Sinclair played Huitema through for a chance in the 40’, and after a few touches and a save, the referee called the play offside. Kadeisha Buchanan had an opportunity in the 43’, which led to a corner, but Sophie Schmidt’s header went out for a goal kick.

“We will find ourselves dealing with different situations during the FIFA Women’s World Cup and that’s what we’re preparing ourselves for,” Heiner-Moller said. “It is important (to play defensive teams) and we have prepared for it and especially in this match we found the challenges we need.”

Canada started the second half in attack earning an early corner kick. Scotland were able to continue their disruption of the Canadian buildup despite Canada’s continued ability to play out of the back at will. Second half substitute Adriana Leon had a chance in the 69’ before colliding with Scottish GK Lee Alexander who came up with the ball. In the 79’ Ashley Lawrence swung a ball in that Christine Sinclair headed on for Adriana Leon who was unable to put it behind Alexander. In the 80’, Sophie Schmidt played Ashley Lawrence down the wing with Lawrence taking the ball into the area, she was taken down earning a penalty kick for Canada. Christine Sinclair stepped up and coolly slotted home the penalty. Second half substitute Hellstrom made an immediate impact after coming on in the 83’ with a long run down the right side to pull the ball back, but, it was cleared for a corner.

“(On the PK), I saw the keeper move early, and had half the net to shoot at, and hopefully I won’t miss that,” said Captain Christine Sinclair. “What gives me confidence is knowing that I’m prepared, I practice penalty shots at the end of every training session, so in the moment you know you’ve done everything you can to be ready.”

The details of Canada’s final Algarve opponent will be determined based on the tournament standings and will be posted to Canada Soccer’s social media accounts as soon as the information is available.

Following the Algarve Cup, Canada will face England on 5 April in Manchester.