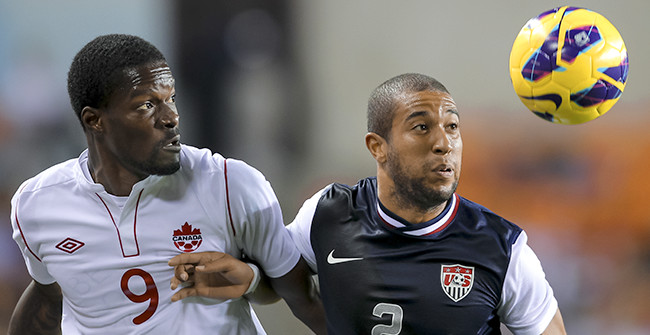 Canada and USA will renew their international soccer rivalry on 5 February 2016 when the two nations meet in a Men’s International Friendly match. The match will be played at the Stub Hub Centre in Carson, CA, USA, near Los Angeles.

The Canadian team will be in camp from 25 January to 6 February to prepare for this match and, more importantly, the upcoming 2018 FIFA World Cup Russia Qualifiers™ in March. Canada faces Mexico in their next match at home on Friday 25 March at BC Place in Vancouver, with tickets on sale today.

Following a terrific initial response that saw over 60% of the lower bowl sold during the exclusive presale window, fans are encouraged to secure their seats quickly and give the gift of soccer this holiday season. Tickets are available via ticketmaster.ca, by phone at 1.855.985.5000, or in person at the BC Place Box Office.

“It is really exciting to see the response from the fans in Vancouver,” said Floro of early ticket sales. “We are very grateful for the support and we hope we will be able to say thank you in March with a victory.”

Both Canada and USA are among the 12 remaining CONCACAF nations ‎on the Road to Russia 2018. Canada are in Group A alongside El Salvador, Honduras, and Mexico; USA are in Group C alongside Guatemala, St. Vincent and the Grenadines, and Trinidad and Tobago. Only two nations from each of three groups advance to the hexagonal CONCACAF Final Round, otherwise known as “The Hex”.

“Every camp and international match is another opportunity to bring our players together and practice our systems and improve our levels,” said Benito Floro, Canada Soccer’s Men’s National Team Head Coach. “USA is a strong opponent, so the match will provide good experience for our team.”