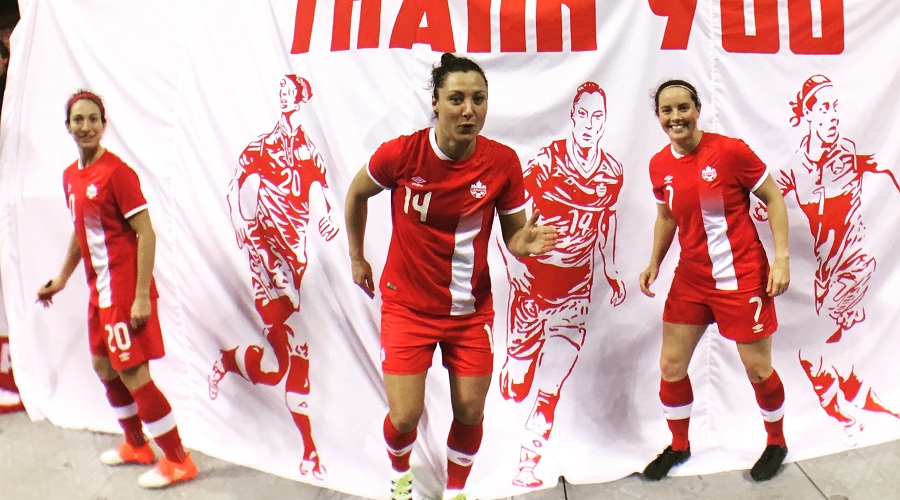 Three of Canada’s finest soccer players said adieu to their National Team careers in an emotional 3:2 victory over Mexico, in front of 22,508 fans, the largest-ever crowd for a women’s international friendly in Vancouver.

Canada opened the scoring in the 14th minute when Rose grabbed the ball in midfield before slipping past a defender and beating the outstretched Mexican goalkeeper Bianca Henninger. Mexico responded two minutes later with a goal from Antonio.

Canada again took the lead in the 26th when Beckie jumped on a poor clearance by a Mexican defender and curled a low shot deep into the net. Beckie put Canada ahead 3-1 in the 40th minute on a nicely taken penalty after captain Christine Sinclair was brought down in Mexico’s 18-yard box. Mexico’s Johnson made it 3-2 in the 59th minute.

The retiring players were joined by their families on the pitch at the conclusion of the match and were given an emotional send-off from Head Coach John Herdman, who led the crowd in a rousing hip-hip-hooray.

A standout defender throughout her career, Rhian Wilkinson started the game on the bench, but came on as substitute in the 57th minute to win her 181st cap. The 34-year-old made her debut for Canada in 2003.

“To get to play at home one last time, it’s very, very special,” said Wilkinson. “It’s been a difficult week, but we’ve kept our emotions in check. We know this is a big day for Marie-Eve, Melissa and I, but it is also for our families, who have put us first for a long time and to be recognized for their contributions to our career.”

Melissa Tancredi, 35, a powerful striker who scored 27 goals in 124 appearances coming into Saturday, also started on the bench before coming on in the 76th minute.

A member of the national team since 2004, Tancredi scored twice in Canada’s famous 2-1 victory over Germany at Rio 2016, for the country’s first-ever win against the European powerhouse.

“It’s so important to end this at home for me,” said Tancredi. “To be able to give this crowd a win at BC Place in front of our family and friends is really special, and to end it on the pitch with Sincy (Sinclair) was amazing as well.”

Nault, meanwhile, started against Mexico to win a 71st cap. The 34-year-old was an alternate in Rio 2016, but was an integral part at the 2012 Olympics after two defenders ahead of her on the depth chart were felled by injuries.

“It was a whirlwind of emotion, I didn’t expect to play 90 (minutes), but I ended up playing 90, and I wanted to do it for the team, surrounded by the best teammates in the world,” said Marie-Eve Nault.

Canadian players spoke all week about how emotional it would be to say goodbye to their friends and teammates, many of whom grew up alongside the trio that finish their careers with a combined 377 appearances.

“It’s been an interesting week for us, because this is a celebration match, to celebrate the medal with our fans, but at the same time saying bye to three legends of this team,” said Christine Sinclair.

“They are some of my best friends that I’ve literally grown up with, but at the same time we wanted to win the game. Very rarely do you get to send off three players like we did tonight, with this atmosphere and this home crowd, and they have meant so much to this team, and this country, and they are going to be missed.

Players from the 2016 bronze-medal squad were honoured before kickoff, while members of the London 2012 team, including Carmelina Moscato, Emily Zurrer and Karina Leblanc, were given a rousing ovation at halftime.