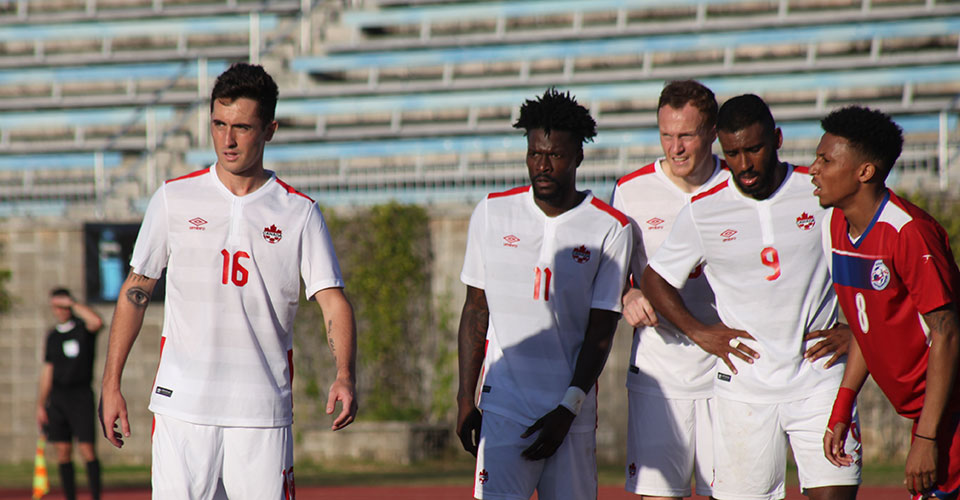 Canada wins 4:2 over Bermuda to kick off 2017 campaign

A young Canadian squad pulled together to win 4:2 over hosts Bermuda in their first match of the 2017 international season. Jonathan Osorio, Tosaint Ricketts, Jay Chapman, and Anthony Jackson-Hamel were the goalscorers in the victory.

“You play football to win, but along the way you look for opportunities to learn and grow,” said Michael Findlay, Canada Soccer’s Men’s National Team Interim Head Coach. “That was an opportunity as we were able to put five players in the park that haven’t played for Canada before.”

Canada featured five debutants, including starters Callum Irving, Ben McKendry, and Ben Fisk. Both Sean Melvin and Jay Chapman featured in the second half, with Melvin injured while Chapman scored the winning goal.

Melvin was injured on the Bermuda play that equalised the match 2-2 in the 55th minute. With Canada not allowed to return Irving into goal, centreback Adam Straith put on the goalkeeper jersey and gloves.

“We have to deal with those types of challenges when playing in CONCACAF,” said Findlay. “We need to be tested, we need to face dilemmas, and we need to find a way to solve those problems and that’s exactly what we did. We are very pleased at the end of the day to have won the football match.”

Into the last 30 minutes, Canada took control and put the match away with the goals by Chapman and Jackson-Hamel, both the firsts of their international careers. Chapman scored on a header off a Kyle Bekker corner kick while Jackson-Hamel scored after an interception on a Bermuda pass.

In the first half, Bermuda had opened the scoring before Osorio equalised with his first international goal. He scored on a rebound after an initial attempt by Jackson-Hamel. Then Ricketts made it 2-1 with his 15th career international goal after a nice play by Osorio.

“We controlled most of the possession and most of the critical areas of the park, but hats off to Bermuda as they were motivated and they were in front of their home crowd,” said Findlay. “They made it difficult, so we were pleased to come away with the win.”

The international match comes at the end of an extended camp in USA and Bermuda, with 27 players taking part in the January pre-season camp. From that larger group, a squad of 18 players traveled to Bermuda for the match. The camp and international match also helped prepare the players for their upcoming 2017 professional seasons in Canada and abroad.

Canada remain unbeaten against Bermuda in nine all-time meetings between the two nations. Against all opponents from 2015 to 2017, Canada has posted 10 wins, seven draws, and eight losses in 25 international matches. Up next, Canada will face Scotland on 22 March in Edinburgh.

Goal for Canada! Chapman on a corner from Bekker.#CANMNT 3-2 BER

#CANMNT is up 2-1 after a goal from Jonathan Osorio followed by a goal from Tosaint Ricketts.#CANMNT 2-1 BER