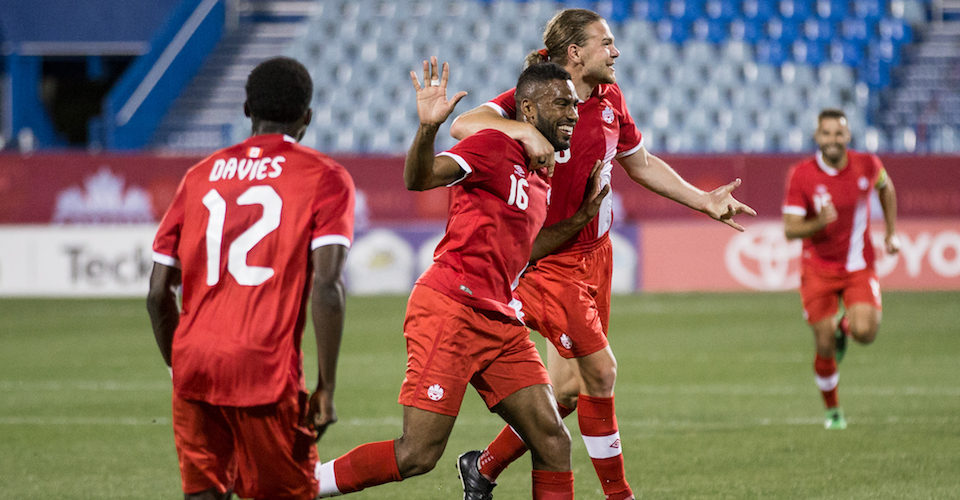 Anthony Jackson-Hamel was the hometown hero as he scored the winning goal in a 2:1 win over Curaçao. The come-from-behind victory served as Canada Soccer’s Men’s National Team send off match before the 2017 CONCACAF Gold Cup this summer.‎‎

Manjrekar James and Jackson-Hamel were the Canada goalscorers in the 13 June victory. Down 0-1 late in the first half, James breathed fire into the Canada comeback when he capitalised on a loose ball inside the box after a Will Johnson free kick.

“It’s very encouraging because we are at the beginning of a new process,” said Octavio Zambrano, Canada Soccer’s Men’s National Team Head Coach. “This victory gives us more confidence, so we are going to enjoy today and then immediately start thinking about the CONCACAF Gold Cup.”

“You just go out there, play your game, and don’t think about it too much,” said Davies. “To put on that Canadian jersey means a lot. I am really happy to get the opportunity to play for Canada.”

Davies had a pair of chances stopped by Curaçao and Jackson-Hamel had a would-be goal turned back because the play was offside. Then Davies was fouled for a Canada penalty and Hoilett hit the post with his kick, but Samuel Piette won the ball back and Jackson-Hamel was right on target for the winning goal.

‎”The youth in this team have lots of energy,” said Jackson-Hamel. “The young players are giving everything to get their place in the lineup, but we are also seeking that consistency to keep our place, too.”

GOALS
Curaçao struck first in the 43rd minute.  Gevaro Nepomuceno from the left side rolled the ball into in the middle of the box to Rangelo Janga who drove it home left footed past Milan Borjan.

Canada got one right back in the 45th minute. From a Will Johnson free kick, Curaçao goalkeeper Eloy Room couldn’t hold the ball. James was Johnny on the spot and side volleyed the ball into the open net.

In the 86th minute, all of Alphonso Davies offensive pressure earned a penalty after he got clipped by Shanon Carmelia.  Junior Hoilett stepped up to the penalty spot, shot it low but was denied by the woodwork.  Curaçao cleared for a Canadian throw in.

Canada took it quickly, Teibert fired it at goal, and Curaçao cleared it but not out of danger. Samuel Piette got the ball to Jackson-Hamel who fired it from long range, low into the corner to give Canada its first lead of the match.‎

SUMMER OF SOCCER IN CANADA
Following three exciting international matches in June 2017, Canada Soccer will complete the Summer of Soccer with a Men’s International Friendly match on Saturday 2 September. At BMO Field in Toronto, Canada will face rivals Jamaica in the first international window following this summer’s CONCACAF Gold Cup.

Tickets to the 2 September match go on sale 21 June starting at just $20, with a special advance window launching on 19 June. In advance of the individual ticket phase, groups of 10+ can submit orders which will be processed ahead of the public onsale if received by Friday 16 June. For complete ticket and event information, fans can visit canadasoccer.com/tickets. The 2 September match kicks off at 19.00 ET and all tickets to the match include free admission to the Canadian National Exhibition (CNE) grounds.