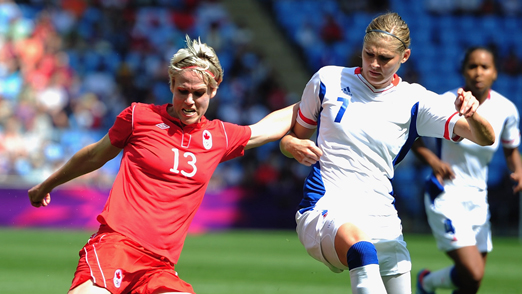 Canada WNT to face France and England in April in Europe.

Canada has added a Women’s International Friendly Match against France to its European visit this spring. The match will take place on Thursday 4 April, 2013 (18.30 local / 12.30 ET / 9.30 PT) at the Ray Stadium in Nice, France.

This will mark the first time the two squads face off since the hard fought bronze medal match at the Women’s Olympic Football Tournament at London 2012, when veteran Diana Matheson scored in the dying minutes of the match to help the Canadians win Olympic bronze.

Canada WNT has an all-time record of 4W-2D-3L against the French dating back to 1995.

This match will be followed by an International Friendly against England on 7 April in Rotherham, England.

Canada’s next scheduled action is the 2013 Cyprus Women’s Cup to take place at various locations in Cyprus from 4 to 13 March.

Canada’s first fixture at the tournament will be a 6 March (14.30 local kick-off) encounter with Switzerland as the GSZ Stadium in Larnaca, Cyprus.