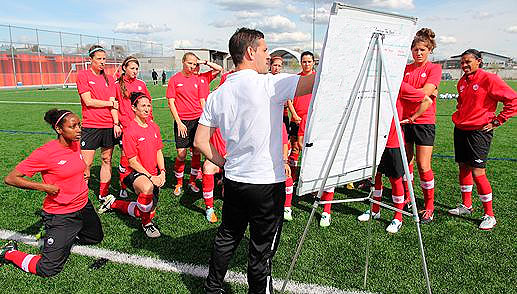 Team sharpens its focus on podium finish at London 2012.

Canada’s women’s national team has begun a second week of training in Vancouver, BC in preparation for the London 2012 Women’s Olympic Football Tournament. The 17-day camp runs 15 April to 1 May, with the first week now in the books. The camp features players currently not in season with their professional or elite clubs.

“It’s been a busy first week in camp,” said Head Coach John Herdman after a training session on Friday 20 April. “The players have been through the fitness testing. Now we start a new journey towards London.”

Coach Herdman is urging his players to use the camp to help elevate their game as Canada goes in search of a medal at the Olympic Games.

“The players are moving towards a new level of performance,” said Herdman. “There are some big changes that need to happen if we are going to finish on the podium.”

Canada will participate in the London 2012 Women’s Olympic Football Tournament from 25 July to 9 August. This will mark Canada’s second participation in the Women’s Olympic Football Tournament, following a quarter-final finish at Beijing 2008. In advance of London 2012, Canada will face China PR in a home Women’s International Friendly match on 30 May (Moncton, NB, Canada) and then USA in an away Women’s International Friendly match on 30 June (Sandy, UT, USA).

The Official Draw for the Olympic Football Tournaments is set to take place in London on Tuesday 24 April 2012. Canada will learn more about its schedule and opponents at that time.

CANWNT: Canada completes Week One of training in Vancouver