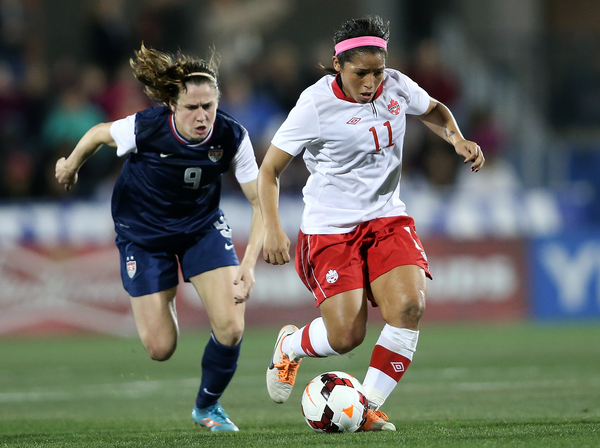 Canada WNT closing the gap with the top-ranked Americans

Canadians offer an encouraging performance but lose 0:1 to USA.

As the United States Women’s National Team has gone from victory to victory over that last little while, not many teams have given them much of a fight.

That is, until Friday night when Canada’s Women’s National Team gave the Americans all they could handle but in the end just didn’t have enough to push it over the line. It was an encouraging performance to be sure that they could take any blow the Americans dealt them, but in a business where results are really all that matter, Canada won’t truly be satisfied until they’re standing victorious.

“We’re disappointed because we’re sick of saying ‘good try,’ ‘well done,’ and ‘we battled hard,’” said Head Coach John Herdman. “At some point we’ve got to beat this team and if it’s not now, then when and hopefully it’s in 2015.”

It was truly one of those games where, had a bounce or two gone Canada’s way the outcome could have been completely different. For all their possession in the first half, the Americans couldn’t find a goal and it was Diana Matheson who had the best chance of all late in the first half but she couldn’t find the target.

The Americans went with a lot of seasoned and experienced players while Canada started 18-year-old Kadeisha Buchanan and had 16-year-old Sura Yekka come in late and create some chances for Canada as they looked for the equalizer late after Sydney Leroux gave the Americans the lead in the 79th minute.

It’s encouraging to think where those players could be in a year and a half.

“We’ve got a bright future now that we’re aligning the system so 2015, I think if you look at that as a year out from a World Cup, there’s not much in it between those two teams,” said Herdman. “And when you think Melissa Tancredi and Kara Lang are to come back, that squad is strengthened.”