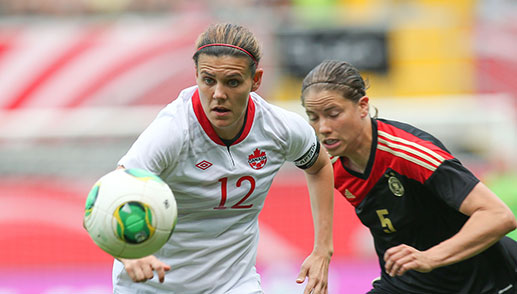 Canada’s women’s national team wrapped up a five-day camp in Paderborn, Germany on Wednesday 19 June, falling 0:1 to their hosts in a 2013 Women’s International Friendly match. Goalkeeper Erin McLeod earned Canada’s footballer of the match honours in the away international played at Benteler Arena.

“I think there were some real positives in there today,” said Canadian head coach John Herdman. “Defensively, we were able to hold them and there was some real resilience from the girls.”

The Canadian team had 19 players in camp, with the maximum 17 featured in the international match. Starter Mélissa Busque and substitute Rachel Melhado both made their debuts in Canada colours. Substitute Danica Wu made her second appearance.

“We’ll keep working. There is still some time left to catch these Germans. All in all, we had some good lessons. I am proud of the girls today.”

Canada’s footballers will now return to their professional and elite clubs to finish out there seasons before regrouping in the fall. Canada’s next home match is 30 October in Edmonton, AB against Korea Republic.