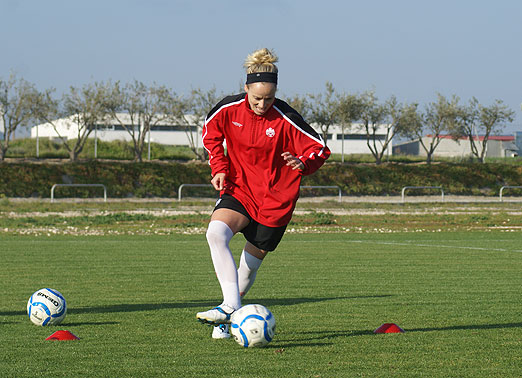 Head coach Herdman’s last day with a squad of 26 players.

Canadian women’s head coach John Herdman had a full 26-player squad on the pitch today for the last session of his pre-tournament camp before the 2012 Cyprus Women’s Cup. The pre-tournament camp ran from 17 February to 26 February in Larnaka, Cyprus, one of the sites for this year’s tournament.

Canada will participate in the fifth edition of the Cyprus Women’s Cup from 28 February to 6 March. Head coach John Herdman will announce his final 22-player roster on Monday 27 February. Canada’s first match is 28 February against Scotland in Larnaka, Cyprus (17.30 local / 10.30 ET / 07.30 PT).

The 28 February match will feature the debut of Canada’s new 2012 Umbro kits, the same ones previewed earlier this month at the Umbro Canada Kit launch on 2 February in Toronto. The new Canadian kit will be worn in back-to-back matches by Canada’s two national “A” teams – the women on 28 February and the men on 29 February (in Limassol, Cyrpus for a Men’s International Friendly match against Armenia).