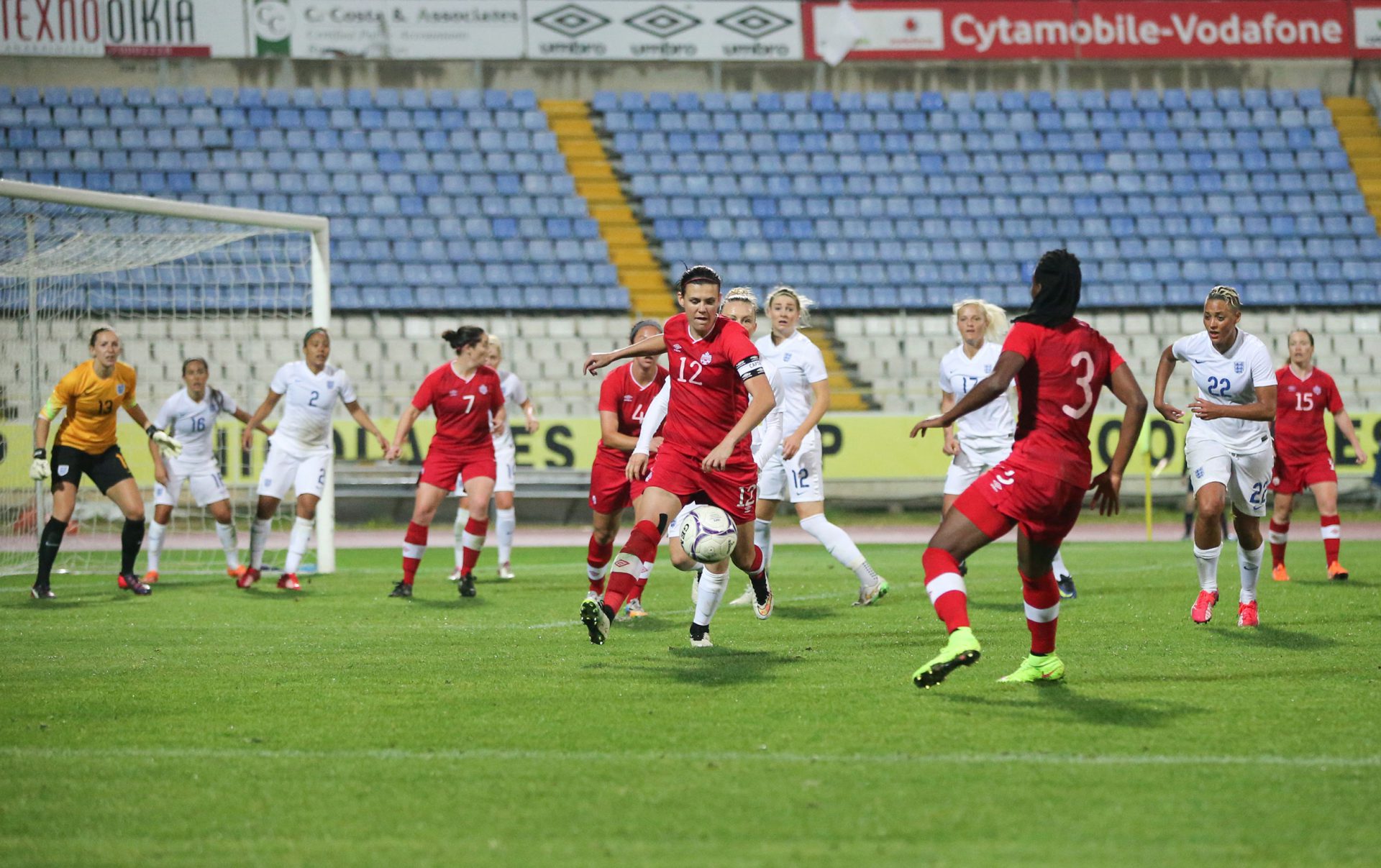 Canada was unable to come back after England scored the lone goal of the match in the 68th minute in the final match of the 2015 Cyprus Women’s Cup.

Canada was unable to come back after England scored the lone goal of the match in the 67th minute in the final match of the 2015 Cyprus Women’s Cup.

The Canadian side held possession and controlled the ball for much of the game, but was unable to get on the scoreboard despite rallying again and again in the dwindling minutes as the rain poured down in Cyprus.

“It was a solid effort,” said Head Coach John Herdman after the match. “The last two times we faced England they were the better team, but I think it was the opposite today – we played really well. I’m disappointed for the girls. We had a few good opportunities early in the game, and I think we could have taken one and changed the outcome.”

As Canada continues to prepare for the FIFA Women’s World Cup Canada 2015TM, Coach Herdman sees this loss is a learning opportunity for the team. “We’ll learn from this. We were caught with a ball over the top, and in World Cups (transitions) are critical, so our centre backs will learn from this – they’ll look at the footage and they’ll get tighter. On the other end, we had chances and we should have put something in tonight, so that’s disappointing as well.”

Heading in to the final match, Herdman outlined his goal for Canada to be the tightest team on and off the pitch during the Cyprus Women’s Cup. So, despite the loss, he remained confident in the team’s play. “We’re looking at a tight team,” he said. “We conceded only one goal in five matches here [including scrimmage against Australia], so we’re in a good space. That could have been a different result tonight.”

Captain Christine Sinclair echoed the coaches’ view that the tournament was a good learning environment for the team.

“I think we made a lot of progress in this tournament, showed a lot of growth” she said. “I thought we outplayed England in the final. It was a tough one to lose.”

Canada conceded only one goal in five matches in Cyprus, but in the end it was the goal that got away which hurt them most.

“I think we take pride in our defense and it was that one goal that lost us the tournament,” said defender Rhian Wilkinson. “We had a strong tournament, there were a lot of good performances here and a lot of growth and movement on the team, but our goal was to win this tournament and that didn’t happen, so we’re frustrated and we’ll take our learning’s and we’ll take our cuts and our wounds and head home and learn from it.”
Sinclair was positive coming out of the last full tournament prior to the FIFA Women’s World Cup this summer. “I think we’re moving in the right direction, but come this summer these are the kind of games that we’re going to have to find a way to win.”

Canada will continue the preparation towards this summer’s FIFA Women’s World Cup Canada 2015™ with a Women’s International Friendly match on 9 April 2015 (21.00 local kick off) in Bondoufle, France.