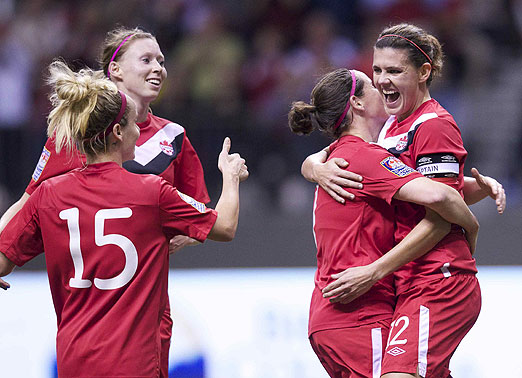 Canada WNT gets win over Brazil

Canada next travels to Sweden for Women’s International Friendly on 31 March.

After five consecutive draws, the Canada-Brazil deadlock was broken today in Canada’s favour in a Women’s International Friendly match in Foxboro, MA, USA. The Canadian team won 2:1 over Brazil in the 24 March 2012 match, with superstars Christine Sinclair (two for Canada) and Marta (one via penalty for Brazil) providing the offence. Canada and Brazil had drawn even in each of the previous five women’s international matches dating back to 10 July 2008.

Canada also now holds the lead in the all-time series dating back to 1996. In 12 international matches between the two sides, Canada has posted four wins, five draws and three losses. Sinclair has scored six times against Brazil (in seven matches) while Marta has scored seven times against Canada (in six matches).

Canada last defeated Brazil on 1 November 2006 at the Peace Queen Cup (a 4:2 win). Brazil won the next match at the Pan American Games on 20 July 2007, a lopsided 7:0 win with five goals scored by Marta in front of the home crowd in Rio. In the five matches that followed, the results were 1:1 in a Women’s International Friendly in Toronto (10 July 2008), 0:0 at the II Torneio Internacional in São Paulo (15 December 2010), 2:2 in the II Torneio Internacional final (19 December 2010 – Canada wins the tournament based on goal differential), 0:0 at the Pan American Games in Guadalajara, Mexico (22 October 2011), and 1:1 in the Pan American Games final (27 October 2011 – Canada wins the tournament on kicks from the penalty mark).

The Canada-Brazil match is part of a two-week camp in USA and Sweden as the Canadian team prepares for the London 2012 Women’s Olympic Football Tournament. On Sunday, Canada will travel to Malmö, Sweden to prepare for a second Women’s International Friendly match on 31 March. The Canada-Sweden match will be played at Malmö Stadion with a 14.00 local Saturday afternoon kickoff. The Canadian team returns home for a short break starting 1 April, but will start anew on 13 April in Vancouver, BC.

So far this 2012 season, Canada has posted a record of eight wins, no draws and two losses in 10 international matches. Canada finished second at both the 2012 CONCACAF Women’s Olympic Qualifying tournament in January and 2012 Cyprus Women’s Cup in March. Beyond the match in Sweden, Canada will play a home Women’s International Friendly against China PR on 24 May 2012 in Moncton, NB. As for the London 2012 Women’s Olympic Football Tournament, that competition runs 25 July to 9 August.