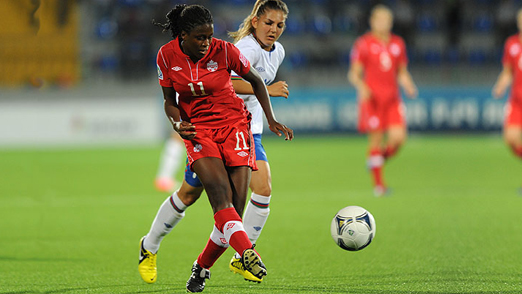 “We are working on a design to allow us to develop talented players that can step in at the highest level,” said Canadian head coach Herdman.

In all, the 21-player Canadian squad features eight young players that have yet to participate in a major “A” tournament, including a pair of 1991-born players that first joined the Canadian youth program in 2006. The eight young players are 1991s Tiffany Cameron and Bryanna McCarthy, 1992s Adriana Leon, Christabel Oduro and Shelina Zadorsky, and 1995s Kadeisha Buchanan, Ashley Lawrence and Nichelle Prince.

Buchanan, Lawrence and Prince are still eligible for the next FIFA U-20 Women’s World Cup in Canada in 2014.

“Some of our our young players are technically good enough to keep up with the likes of Japan and France, but there is not yet a plethora of them,” said Herdman. “If we can get a group of (youth) clubs committed to creating a development environment, that will give us a greater pool of players.”

Following the Yongchuan Cup in January, Canada will participate in the 2013 Cyprus Women’s Cup from 4-14 March (with the schedule yet to be announced).