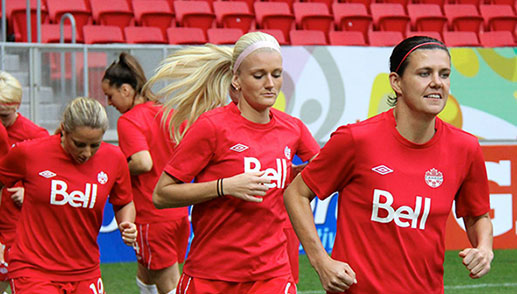 Canada WNT ‘Like a Wounded Animal’ Up Against Brazil

In the three games Canada’s Women’s Team have had against Brazil since Head Coach John Herdman has been Canadian Head Coach, each time the two teams have featured in incredibly close games.

The last time the two teams met just prior to the 2012 London Olympics, Brazil scored a late winner seconds after Christine Sinclair had tied the match in second half stoppage time to record a 2:1 victory. The time before that, it was Canada registering the 2:1 result.

Herdman’s first time in charge of Canada against Brazil came at the 2011 Pan American Games when Canada won the gold medal on penalties after 90 minutes of normal time and 30 minutes of extra failed to produce a goal.

On Wednesday, expect more of the same.

“There’s a massive rivalry here. For some reason, these games turn into a bit of a fight. I don’t know where it’s come for or if it’s something that’s happened before my time but they’re almost like bloodbaths,” said Herdman after Canada trained in on Tuesday in possibly the hottest conditions they’ve faced since arriving in Brazil.

“Both teams get right up for it and I think that’s the exciting thing about it.”

Not that there’s any extra motivation needed whenever someone plays Brazil, but Canada will be looking to rebound from Sunday’s surprise 1:0 loss to Chile.

Depending on the result between Scotland and Chile earlier in the day, Canada may just need a draw to advance but they’re going in with a winning mentality. They want to prove that the defeat to Chile was an aberration.

“There’s something about a wounded animal here and the most dangerous time is when someone’s been a bit wounded,” said Herdman. “I think the team are ready to give Brazil a good crack and it’s great to see Brazil’s got their best team at this tournament.”