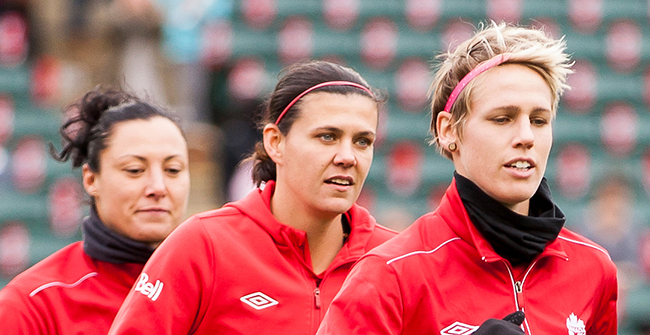 Canada WNT getting another chance at World Champions

Three days after Japan showed the kind of clinical finishing expected of the defending World Champions, Canada’s women’s national team will be out to rebound in the venue that will host the final of next summer’s FIFA Women’s World Cup Canada 2015™.

Japan scored once in the first half and twice in the second, and while Canada mustered some quality scoring opportunities they weren’t able to match the kind of finishing that the Japanese had on the night.

“They definitely were better in the attacking third and we’ve talked about that,” said Head Coach John Herdman. “We want to make sure that these fans that turn up, we owe them a goal. We owe them something to celebrate. We’re going to be excited to get out there.”

Japan is the latest of the world’s elite to play against Canada and players and staff are well aware that teams like Japan are the teams that will stand in the way of them fulfilling their dream of winning a World Cup on home soil. The first round in Edmonton went to the Japanese last Saturday and Canada knows what needs to be done to close that gap on Tuesday at BC Place in Vancouver.

Canada will have to match Japan’s technical and tactical mastery and find the scoring touch that was lacking just a few days ago.

“You just don’t get this level of opposition that can move the ball this quickly too often,” said Herdman of the Japanese team. “We can’t even train against that so hopefully we’ve learned from it and we can match their physicality.”

Over the course of 2014, Canada’s hosted elite teams in the shape of the USA, Germany, and now Japan. The next time Canada faces this sort of opposition on home soil will be when it matters most. So for players and fans, the experience at BC Place will feel that little bit more important.