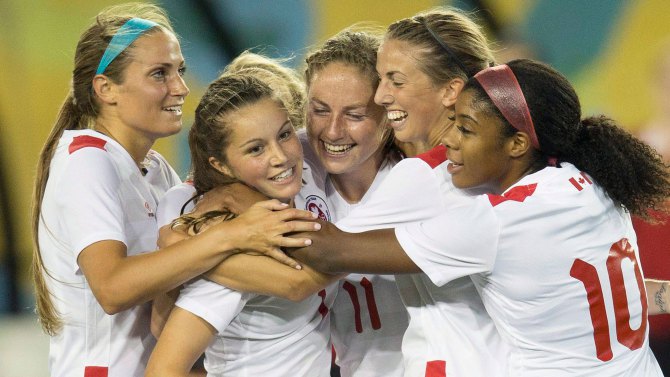 A young Canada’s Women’s National Team opened play at the Toronto 2015 Pan American Games on Saturday with a decisive 5:2 win over Ecuador.

A young Canada’s Women’s National Team opened play at the Toronto 2015 Pan American Games on Saturday with a decisive 5:2 win over Ecuador.

Canada opened fire early in the match, establishing solid control by maintaining possession and pushing on the attack. In the 12th minute, forward Janine Beckie scored her first of two on the night on a clean left-footed strike from the top of the six-yard box.

Ecuador seemed to regain their footing for a moment however in the 29th minute and managed to get past goalkeeper Stephanie Labbé to make it 1-1 on a free kick that got through the Canadian wall fairly easily.

While they appeared rattled for a few minutes, Canada maintained their high energy level, led by Beckie and Fletcher who both were very active on the wings all night.

In what initially looked like a cross, left back Shelina Zadorsky foiled the Ecuadorian keeper and saw her strike find the back of the net to give Canada the lead heading into the locker room.

Canada came back out of the half on a mission, wasting no time in re-establishing its pace. Three minutes into the second half, Beckie found Zadorsky on a perfectly placed corner, and the defender did well to chip it over the open hands of Berruz to make it 3-1.

Canada added two more back-to-back at the 77th minute, first with Beckie’s strike, her second of the night, then by a confident finish from Emma Fletcher on a great serve by Lawrence. Canada was then leading 5-1 going into the final 20 minutes of play.

And that’s when it got tricky.

Canadian goalkeeper Labbé, on an attempt to save a breakaway by Ecuadorian Riera, was shown a straight red card and ejected from the match at the 86th minute.

Since the Canadians had already made their three allowed substitutions, they had to identify a field player to cover the role. After a confusing episode of trying to figure out which jersey to put her in, Janine Beckie put on the gloves and bravely stepped up to the line to face the free kick awarded to the opponent.

Once again, the defensive wall setup by the Reds seem to let them down, and Ecuador got one back just past the 90th minute of play.

Canada managed to hold on and ended-up securing a convincing 5:2 win over the Ecuadorian squad, which should be noted was mostly comprised of players having competed in the FIFA Women’s World Cup Canada 2015 the month before.

Canada WNT will now face Costa Rica on Wednesday, 15 July (20.30 ET / 17.30 PT). The match will be broadcast live on Sportsnet and available online at CBCsports.ca.

They will however have to do so without their starting goalkeeper, Stephanie Labbé, who will have to serve a one-game suspension for her expulsion. This will give young Kailen Sheridan, from Whitby, ON, an opportunity to showcase her game in front of friends and family.

Tickets for Canada’s Toronto 2015 Pan Am matches are still available via ticketmaster.ca or by visiting toronto2015.org.