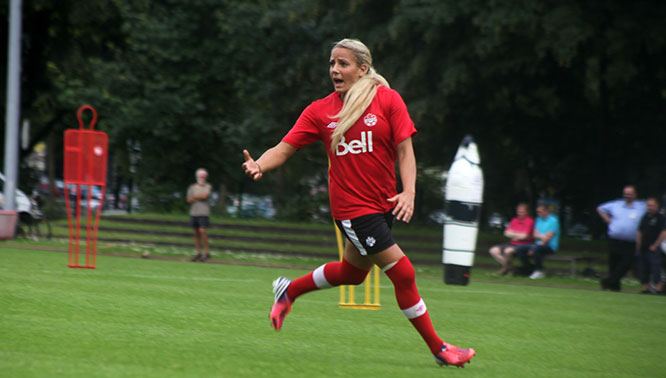 Canada’s full 19-player roster has arrived safely in Paderborn, Germany in advance of this Wednesday’s 2013 Women’s International Friendly match against Germany. The team had two training sessions on Monday 17 June, with the last of the players arrived from their clubs in North America.

Canada’s roster features 14 players from the National Women’s Soccer League, four players from the W-League, and one player from the Swedish Damallsvenskan. Jodi-Ann Robinson of the NWSL’s Western New York Flash – who played Saturday in league action – was the latest player called into the camp during the short FIFA Women’s International Window.

Of note, two players on the Canadian roster have yet to make their debut at the international “A” level – newcomers Mélissa Busque and Rachel Melhado. Both have had a couple of days to impress head coach John Herdman in hopes of earning a first appearance. Busque plays for the Seattle Sounders while Melhado plays for the Toronto Lady Lynx.