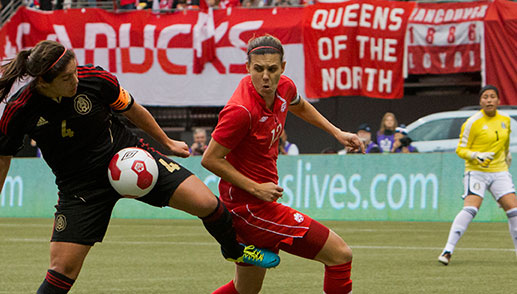 On 11 January, Canada opened the four-nation competition with a 2:1 victory over Korea Republic while Mexico played to a 0:0 draw against host China PR. On 13 January, the Canada-Mexico match will be followed by China PR-Korea Republic (only the China PR matches will be televised by CCTV).

This marks the first Canada-Mexico encounter since a Women’s International Friendly match on 24 November 2013, a 0:0 draw in front of 21,217 fans at BC Place. As CONCACAF rivals, the two nations have a long-standing rivalry dating back to their first match in 1994. Under current Canadian head coach John Herdman, Canada has posted a 3:1 win (27 January 2012 to qualify for the London 2012 Olympics) and the 0:0 draw against Mexico.

In Shenzhen, China PR, both Canada and Mexico trained in the rain on Monday afternoon. In the evening, select delegates from both federations attended a dinner reception organised by the Chinese Football Association and local organisers.