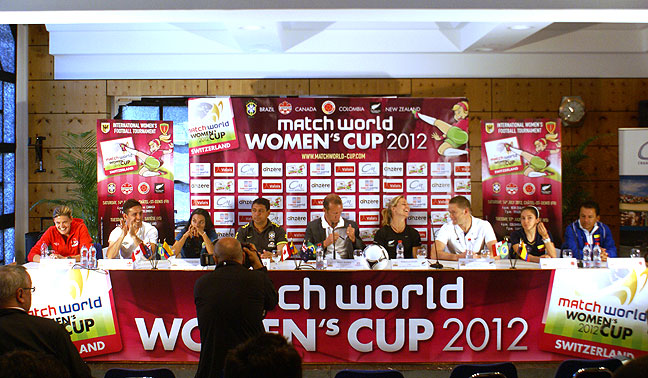 Canada to play 14 and 17 July in Switzerland

Canada, Brazil, Colombia and New Zealand will take part in the Match World Women’s Cup 2012 this 14 and 17 July, a final international test before the London 2012 Olympics. Each team will play matches against two opponents, with the team gaining the most points crowned winner of the tournament.

“It is quite something to have four of the best women’s teams here in Switzerland,” said Marc Biolley, the tournament’s director and managing director of Match World.

“This tournament gives us a chance to get in the right mind set before the Olympics while also taking part in two tough matches,” said Canadian coach John Herdman.

As this tournament is so close to the London 2012 Olympics, each team will play only two matches. This ensures that London 2012 group opponents Brazil and New Zealand do not face each other so close to their big match in late July.

Of note, every match at the Match World Women’s Cup will be decided with both a winner and a loser. If the match is decided in 90 minutes, then the winner is awarded three points while the loser is given no points. If the match ends in a draw, then kicks from the penalty mark will determine a winner that gets two points and a loser that gets one point. There is no extra time, so kicks from the penalty mark will follow a draw immediately after 90 minutes.

To help kick off the event, all four teams took part in a Wednesday 11 July press conference at the Régent Congress Centre in Crans-Montana. Along with the four head coaches, a star player from each team was also present.

“As a player, this is the ideal location to prepare and focus for the London 2012 Olympics,” said Christine Sinclair.