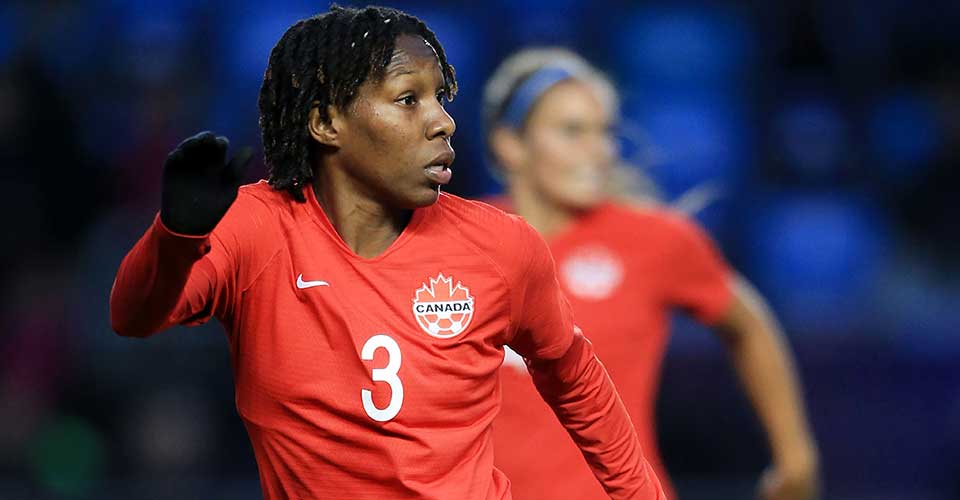 Canada Soccer’s Women’s National Team are ready to face Brazil in the opening match of the China Four Nations Tournament in Yongchuan, China PR. The match […]

Canada Soccer’s Women’s National Team are ready to face Brazil in the opening match of the China Four Nations Tournament in Yongchuan, China PR. The match will help Canada continue their preparation for the Concacaf Women’s Olympic Qualifying Tournament which will be played in January/February 2020.

Canada will face Brazil on Thursday 7 November at 16.00 local (03.00 ET / 00.00 PT) and then either the winner or loser of the China PR-New Zealand match on Sunday 10 November. Fans can get updates on the Canada-Brazil match on Canada Soccer’s digital channels including Facebook, Instagram, Twitter and Youtube. Fans are also encouraged to follow Canada Soccer’s Women’s National Team on and off the pitch by using the social media handle #CANWNT.

“We want to use these two matches against strong opponents to prepare for the Concacaf Olympic Qualifiers in January,” said Kenneth Heiner-Møller, Canada Soccer’s Women’s National Team Head Coach. “The tournament will give us the opportunity to assess players as we will need to chose a roster of 20 players for the Olympic Qualifiers and we want the players to have the opportunity to show that they can be part of this roster. Of course, we would like to win the tournament, but we also want to make sure we are getting ready for the Concacaf Olympic Qualifiers.”

This will be the 21st international meeting between the Canada and Brazil since they first met in 1996. Canada most recently won 1:0 over Brazil at TD Place in Ottawa on 2 September 2018. Two years earlier, Canada defeated host nation Brazil in the bronze medal match at the Rio 2016 Olympic Games to secure back-to-back podium finishes at the London 2012 and Rio 2016 Olympic Games. Canada earned the distinction of becoming the first Canadian team to win back-to-back medals at the Summer Olympic Games since 1908 as well as the first-ever women’s Canadian team to repeat on the podium.

“You can always expect a good game against Brazil,” said Canadian centre back Kadeisha Buchanan. “They have very technical and physical players, they also have a lot of big names like Marta. They are great players and they are also very strong. We will need to be very connected as a team when we face them.”

So far this year, Canada have posted a record of seven wins, three draws and three losses in 13 international matches. Reaching back to September 2018, Canada’s record is 12-3-4, with three of these losses against the top three nations from the FIFA Women’s World Cup France 2019™ (USA, Netherlands and Sweden). Earlier this year,

OLYMPIC MEDAL WINNERS & CONCACAF CHAMPIONS
Canada are two-time Olympic bronze medal winners (2012 and 2016) and two-time Concacaf champions (1998 and 2010). In all, Canada have participated in seven consecutive editions of the FIFA Women’s World Cup™ (1995 to 2019) and three consecutive editions of the Women’s Olympic Football Tournament (2008 to 2016). At Rio 2016, Canada Soccer’s Women’s National Team were the first Canadian Olympic team to win back-to-back medals at a summer Olympic Games in more than a century.
WOMEN’S NATIONAL TEAM: https://www.canadasoccer.com/women-s-national-team-p144312
Canada Soccer’s Women’s National Youth Teams, meanwhile, have won four Concacaf youth titles: the 2004 and 2008 Concacaf Women’s Under-20 Championship, the 2010 Concacaf Women’s Under-17 Championship, and the 2014 Concacaf Girls’ Under-15 Championship. Canada have qualified for seven editions of the FIFA U-20 Women’s World Cup (including a silver medal at Canada 2002) and all six editions of the FIFA U-17 Women’s World Cup (including a fourth-place finish at Uruguay 2018).