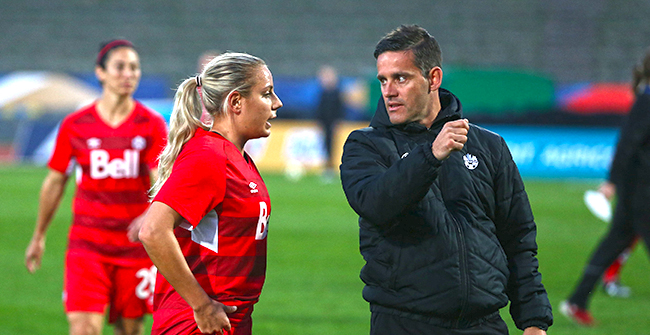 The match against New Zealand will pit Canadian coach John Herdman against a team he helped build, but that is not what he is thinking about going into Canada’s Women’s National Team second match of the FIFA Women’s World Cup set for Thursday 11 June at Commonwealth Stadium in Edmonton, AB.

“I’m really looking forward to this match,” said Canada’s Head Coach John Herdman in a pre-match press conference on Wednesday. “For people that know the history, I’ve worked with this [New Zealand] team, given it a good six years of my life and they’ve given me six years of theirs. I’ve known a lot of these girls since they were teenagers and now they are at the peak of their career so it’s going to be a tough test for Canada.”

“We’re very clear. They’re the enemy at this point. We need six points, we want six points,” added Herdman. “They’re going to bring a physicality to this game they’ll bring a higher intensity to this game than the Chinese did. So you’ll see Canada adjusting the style and we’ll be very balanced in the way that we play against New Zealand and take what they give us.”

The New Zealand team had a taste of what Commonwealth Stadium will be like when they face the home team, having experienced the roar of the Canadian fans from the dressing room prior to their 0:1 defeat against the Netherlands on opening day.

On the eve of their second match, Herdman was joined in the pre-match press conference by Kadeisha Buchanan, the forceful teenage fullback who has been making waves in the soccer world since joining the senior squad in December 2012.

Buchanan thinks the home town crowd will give them what they need to best Herdman’s former team.

“I think we’re all ready, we’re all prepared,” said Buchanan of the upcoming matchup. “We’ve done a lot of [work] behind the scenes like watching film and obviously watching the game they played against the Netherlands, so I think the team is really prepared to go out there and perform.”

Canada’s second match is their last group stage match in Edmonton, before wrapping up the first round on 15 June at the Olympic Stadium in Montreal against the Netherlands.

MULTIMEDIA ALERT: All of Canada’s pre-match (day prior) and post-match press conferences will be streamed live on canadasoccer.com (on match page).