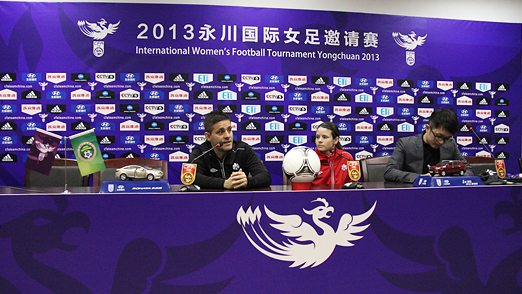 The first match of the three-game round-robin tournament in China will be Canada’s first fixture since capturing a bronze medal at the London 2012 Olympics, and for Head Coach John Herdman, the game is an ‘exciting’ launching point as his team begins its preparations for the FIFA Women’s World Cup Canada 2015.

The Canadian coach has used the season’s first camp in China to call-up some young players – and Herdman has been pleased with the group’s chemistry in training in advance of the tournament.

“The young players have been great. The older players are feeding off them, and for the young players, just to be with these bronze medallists – it’s a real thrill for them.”

Despite the likelihood of integrating new players into the line-up – Herdman is adamant that his team need to put in an organized performance against a strong China PR team.

“Our team has to stay very compact and tight. That will lead us into what we want to do attacking wise.”

Fans will be able to track the match following limited live coverage on Twitter. Full match highlights and post-match reaction will be uploaded to CanadaSoccerTV after the game.