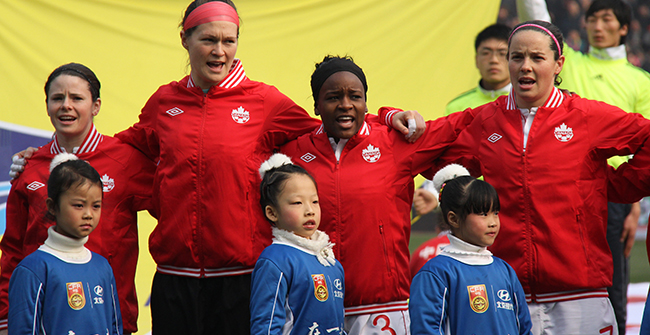 A monumental year for women’s soccer in Canada gets underway with a tournament in China as Canada’s Women’s National Team will get some early tournament action against Korea Republic, Mexico, China PR.

“The team is starting to form as we get closer to the FIFA Women’s World Cup. We’ve been able to get access to our young players who have been pretty much locked in the NCAA system for the past three or four months,” said Herdman. “But we’ve added those players to the squad and the Centralized Development Program (CDP) group to evaluate them and their readiness.”

The team opens competition on Sunday 11 January against Korea Republic before their second game against CONCACAF rivals Mexico on Tuesday 13 January.

But it’s the final game against China PR (15 January) that will perhaps be the most interesting as both teams will play in Group A at the FIFA Women’s World Cup in June in Edmonton, AB.

“We’ve been thinking about this for the last few weeks in how to approach that particular fixture and we’ve got some ideas on either going to try and go for a confidence booster or try to keep our cards up our sleeve,” said Herdman. “We may try to go for a balance of those when choosing our lineup and the tactics we use.”

All three games will take place at the Shenzhen Stadium in Shenzhen, CHN.

Full reports will be posted to canadasoccer.com following each matches.