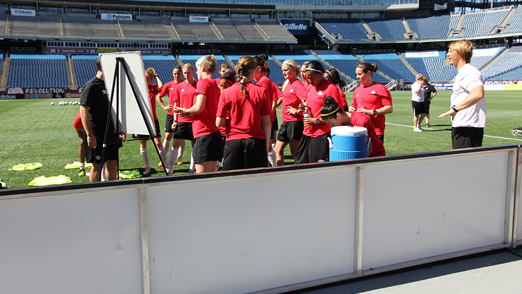 With the Canadians training in Massachusetts since 19 March in preperation for the match, Head Coach John Herdman is confident his side is in the right mindset for what will be a difficult test against one of the best nations in the women’s game.

“The team is looking focused,” said Herdman after training on 23 March. “I think with Brazil it’s going to be a little bit about the unexpected. We’re hoping Marta and the key players will be out there.

“There are a few of our girls that will get a run out and they will have to work hard. That will be the mindset of the team.”

The most recent meeting between the two teams was on 27 October 2011 in the final of the Pan American Games in Mexico. Canada won the gold medal on kicks from the penalty mark after the match ended in a 1:1 draw.

Captain Christine Sinclair, who scored Canada’s equalizer on that day, is looking forward to using Saturday’s match to measure just how much progress the Canadian team has made in recent months.

“It’s a good measuring stick for us,” said Sinclair after practice at Gillette Stadium. “Brazil is one of the top teams in the world and definitely a podium threat for us at London 2012. It’s good to see where we stand in comparison to one of the world’s best.”

Many observers will be keeping a keen eye on the battle between Canada’s Sinclair and Brazil’s Marta – arguably two of the best players in women’s football. Sinclair and Marta are former club teammates, having won championships together at FC Gold Pride and the Western New York Flash in Women’s Professional Soccer.

Canada’s captain is looking forward to taking on here former club-mate on Saturday.

“She’s an incredible player. She does things on the ball that no one else in the women’s game is able to do. You know you’re not going to contain her for a full 90 minutes but I trust our back-line to get the job done.”

Fans can follow the match on Twitter: @CanadaSoccerEN. Complete pre- and post-match coverage will be available at CanadaSoccer.com, as well as via CanadaSoccerTV.

Canada are five months away from taking part in the Women’s Olympic Football Tournament at the London 2012 games.

Following the match in Foxboro, MA, the Canadian team will head to Malmö, Sweden for a Women’s International Friendly against the Swedes on 31 March 2012.