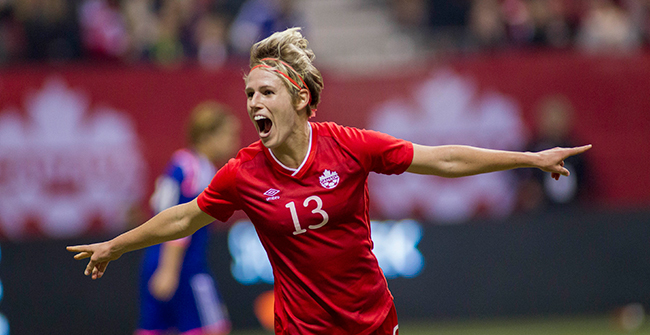 For just over 90 minutes at BC Place on Tuesday night, Canada’s women’s national team was the equal of the reigning World Champions Japan.

But when you take on the best teams in the world, those sorts of teams make the most of the chances that are given to them. That’s exactly what happened as Aya Sameshima scored with virtually the last kick of the game to give Japan a 3:2 win.

As was the case a few days in Edmonton, Japan showed the kind of top quality finishing that Canada is hoping to emulate when it matters most in eight months.

“I think in the first 15 minutes, we should have been two up. We had two great chances,” said Head Coach John Herdman. “I thought we started the game brightly the other day. We got caught with their quality in the first 10 minutes in Edmonton.”

Japans scoring didn’t so much come down to breaking down the Canadian tactics and outplaying the Canadians. Their opening goal was of the highest quality and the other two were chances off little mistakes.

They’re the sorts of mistakes that won’t need a vast adjustment in how the team plays but will hopefully get ironed out the more this team plays together. And with this team together for vast periods of time over the next eight months, the hope is that there will be much fewer little mistakes that can be exploited.

“We’re starting to see a different Canada now. At times we were able to take it to Japan,” said Herdman. “When you think back to the (2012) Olympics and we had three shots in the whole game and scored one goal. Tonight we had 12 shots.”
“We’re going to be there fighting. This team isn’t going to be too far away with all the preparation we do.”