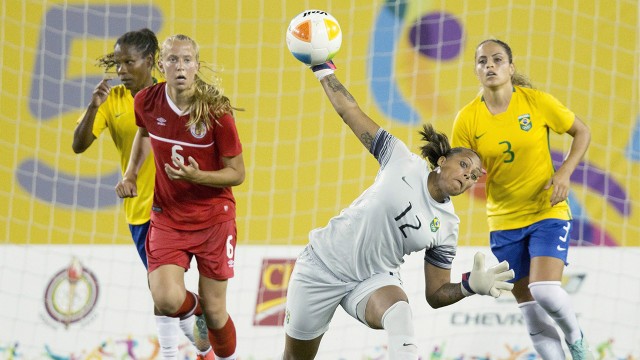 Canada WNT through to Toronto 2015 medal round

Canada’s next opponent will be another strong South American squad that competed at the FIFA Women’s World Cup Canada 2015 last month. Columbia, who won Group A, will face Canada on Wednesday, 22 July in the first of two semi-finals.

The young Olympic Development squad forming Canada’s Women’s National Team at the 2015 Toronto Pan American Games offered decent opposition to a much more experienced Brazil team, but were ultimately defeated 2:0. While on paper Canada finishes group action in the tournament with a win and two losses, they will still live to compete another day as they go through to the medal round on a favourable goal difference over Costa Rica.

Canada started the match with confidence, resorting back to its initial starting back line of McNicoll, Buchanan, Quinn and Zadorsky in front of Labbé. Quinn however moved up in a more defensive midfielder position early on as Chelsea Stewart took on the role of left fullback, with Zadorsky moving to centre beside Buchanan.

The Canadian formation didn’t show much attacking threats in the first half, but was organized and defended Brazil’s counter-attacks with assurance.

“[Brazil] was a tight, disciplined, team, and we said that from the start,” said Canada’s Head Coach Danny Worthington. “Our young players matched the Brazilian top team there. I think for the first 45 minutes I don’t know whether Brazil expected that or not, but what we showed is that we matched them in periods and it was hard for them to break us down. I’m proud of the way the young players performed in that first half.”

Canada was expecting the game to open up in the second half, and Brazil was unfortunately the one that capitulated on these chances, scoring in the 55th and 86th minutes to capture the 2:0 win.

“We brought a young squad here, who are learning to be international footballers, and it’s good karma,” said Worthington. “This is a massive step forward for us as a country, giving these players a chance against a number six team in the world, part of the best teams out there.”

Despite the loss, Canada will be playing in the semi-finals, and is still in the running to defend its 2011 Gold Medal. It did receive some help from group opponent Ecuador who pulled off a 2:0 win over Costa Rica in the earlier match on the night. It gave Canada a cushion, and a ticket to the next round.

Canada’s next opponent will be another strong South American squad that competed at the FIFA Women’s World Cup Canada 2015 last month. Columbia, who won Group A, will face Canada on Wednesday, 22 July in the first of two semi-finals.

“Colombia had a great World Cup run, so it’s going to be another difficult game and we definitely got to start preparing for that,” commented midfielder Jessie Fleming. “Any of the South American teams are great technicians on the ball, they’re all very skilled and unpredictable at times. But I think this group is up for the challenge though. We’re ready to take on anyone at this point.”

Tickets for the upcoming Canada-Colombia match are on sale via toronto2015.org or ticketmaster.ca.