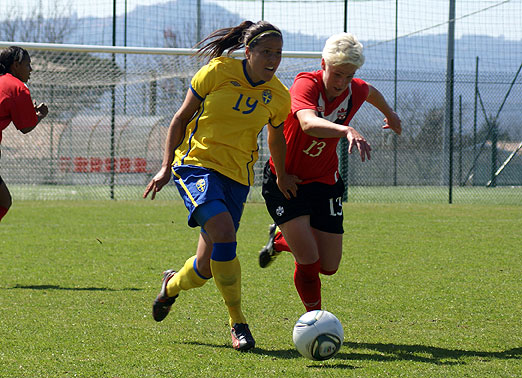 Canada to face Sweden on FIFA International Date on 31 March.

“The game against Sweden will be a good measuring stick to see how far we’ve come since we last played them in November in Phoenix,” said Canadian Head Coach John Herdman. “It is going to be a lot tougher taking them on in Sweden, so that will be a good challenge for us. The game is an excellent opportunity to square off against a genuine podium threat as we continue our preperations for London 2012.”

A two-week women’s national camp in Vancouver has also been announced. Following the match in Sweden, non-affiliated players will have a short two-week break before reporting to the Vancouver camp from 13 to 27 April. Only players that are unattached to clubs will take part in the April camp.

As for Canada’s March opponent, this will be Canada’s first trip to Sweden since 28 May 2005. Including that match, Canada-Sweden encounters have since been split three wins a piece (with the six matches played in Sweden, China PR, Italy and USA). Canada won the most recent match 2:1 on 22 November 2011 in Phoenix, AZ, USA.

Both Canada and Sweden are currently preparing for the London 2012 Women’s Olympic Football Tournament. At the most recent FIFA Women’s World Cup Germany 2011™, Sweden won a bronze medal to tie its second-best result in the competition (Sweden also won bronze at China 1991). Sweden’s best result was a silver-medal finish at USA 2003, the same year Canada recorded its best result with a fourth-place finish.

In 2011, Sweden’s overall record was 10 wins, two draws and eight losses. Canada, meanwhile, posted a record of 14 wins (tied for first in the world), four draws and six losses.