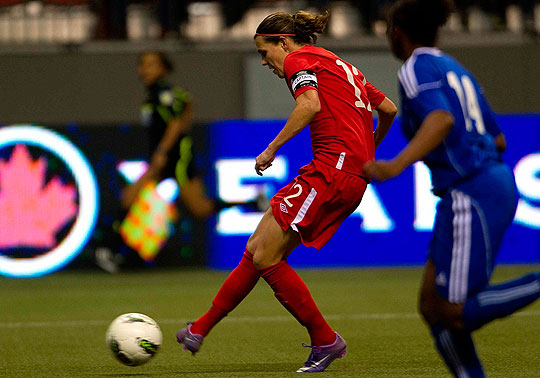 Canada will face Sweden in an away Women’s International Friendly match this Saturday 31 March in Malmö, Sweden. The two sides will kick off at 14.00 (local) at the Malmö Stadion. This will mark the fourth match between the two sides since January 2011.

Both teams are currently preparing for the London 2012 Women’s Olympic Football Tournament, with Canada having earned its berth earlier this year after Sweden booked a ticket in 2011. Just last year, Canada won two of three matches against Sweden, with all three matches played on neutral ground. This marks Canada’s first match against Sweden in Sweden since 28 May 2005.

The highlight of Canada’s season so far has been the qualification for the London 2012 Olympics (thanks to a big 3:1 win over Mexico on 27 January 2012). Also of note, Candace Chapman (27 January) and Karina LeBlanc (24 March) have become the ninth and 10th footballers to make their 100th appearance for Canada. As for soccer stars over the first two months of the calendar year, Desiree Scott and Rhian Wilkinson won Canadian Player of the Month honours in January and February, respectively.

In Sweden, coach Herdman has had 20 players in camp since 25 March 2012. The team traveled directly from Boston, MA, USA to Malmö, Sweden after the 24 March Canadian victory over Brazil.

While the Saturday 31 March match will not be broadcast in Canada, the Women’s International Friendly match will be broadcast in Sweden on TV4 Sport. The broadcast kicks off at 14.00 local / 08.00 ET / 05.00 PT. A full match report will be available on CanadaSoccer.com.