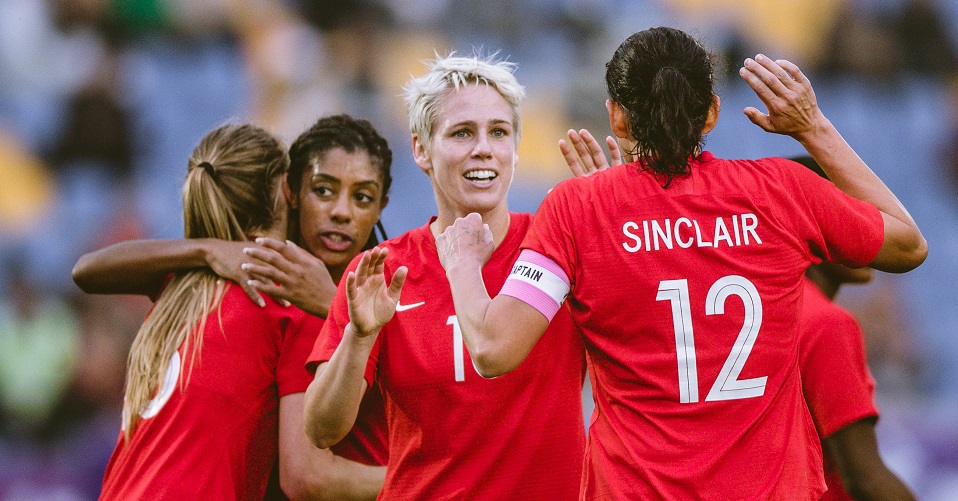 Canada got back to their winning ways thanks to goals by Christine Sinclair and Janine Beckie along with a record-tying clean sheet by Stephanie Labbé. Canada […]

Canada got back to their winning ways thanks to goals by Christine Sinclair and Janine Beckie along with a record-tying clean sheet by Stephanie Labbé. Canada delivered a 3:0 win over New Zealand to clinch third place at the International Women’s Football Tournament Yongchuan 2019 in China PR.

Captain Sinclair scored her career 183rd international goal in the first half while Janine Beckie scored a brace in the second half, with Ashley Lawrence providing the assist on the first and third goals. Sinclair is now just two goals away from breaking the all-time international goalscoring record. Goalkeeper Labbé, meanwhile, tied Canada’s single-season record with her eighth clean sheet of the season.

“We got the result we wanted and that is very important for the confidence of the team,” said Kenneth Heiner-Møller, Canada Soccer’s Women’s National Team Head Coach. “Scoring three goals and getting the clean sheet feels very good.”

With the win, Canada improved their 2019 record to eight wins, three draws and four losses in 15 matches, including 10 clean sheets (second most in a single year for the Women’s National Team). Earlier this year, coach Heiner-Møller guided Canada to a 10-match unbeaten streak, the second longest in program history.

The 10 November match was Canada’s last of the 2019 season, with the next international window blocked for the Concacaf Women’s Olympic Qualifying Tournament in January and February 2020. Canada have been drawn into Group B to face Saint Kitts and Nevis on 29 January, Jamaica on 1 February, and Mexico on 4 February. The Concacaf semi-finals are scheduled for 6 February followed by the Concacaf Final on 9 February.

“Since the FIFA Women’s World Cup, we have been looking at our depth and staying loyal to that process in order to get down to 20 players before the Concacaf Women’s Olympic Qualifiers in January,” said Heiner-Møller, who took 27 different players to Asia for the international windows in October (Japan) and November (China PR).

Canada created their chances throughout the match. In the 10th minute after a nice run down the right side, a Deanne Rose cross to Jordyn Huitema in the box was cleared by the New Zealand defender. Then in the 35th minute, they made it 1-0 on the Christine Sinclair header after a cross from the right from Ashley Lawrence. The play moved from Huitema to Gabrielle Carle to Lawrence on the right to Sinclair inside the box.

Before the break, Kadeisha Buchanan hit the crossbar with a header off a set play.

In the second half, Janine Beckie doubled Canada’s lead in the 64th minute, taking advantage of a rebound after goalkeeper Erin Nayler made the save on Huitema. Three minutes later, Beckie scored again, this time off a Lawrence cross.
Late in the match, 15-year old substitute Olivia Smith nearly scored her first international goal, but her shot from the right was just wide of the target.