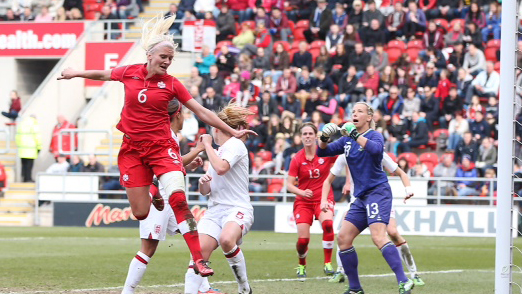 Canada WNT draws 1:1 with France, but falls 0:1 to England on European trip

Canada has wrapped up an eight-day European camp during the most recent women’s international break in 2013, drawing even 1:1 with France on Thursday 4 April before falling 0:1 to England on Sunday 7 April. The team will come home with players returning to their clubs in the week leading up to the inaugural National Women’s Soccer League season.

Canada successfully built towards added-time heroics against France (courtesy Kaylyn Kyle’s fifth international goal), but had the trick turned on them three days later when England’s Ellen White scored a 92nd-minute winner in Rotherham, England. White’s 13th international goal was the lone marker of the Canada-England rematch from the 2013 Cyprus Women’s Cup final, also a 1:0 victory for England.

“We are still trying some new things, so it may take us awhile to gel, but we are lucky because we have 2-3 years before we play in that FIFA Women’s World Cup in Canada,” said Canadian head coach John Herdman. “It is nice to be able to test a few things at this stage.”

Canada’s next Women’s International Friendly match is Sunday 2 June at BMO Field against CONCACAF rival USA. The upcoming match will serve as Canada’s international homecoming following the bronze-medal performance at the London 2012 Women’s Olympic Football Tournament. The 2 June match will be followed by an away international against Germany on 19 June.