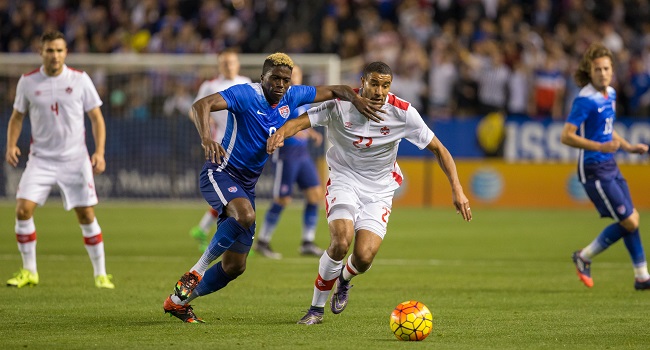 Canada Soccer’s Men’s National Team has wrapped up a 13-day camp ‎to kick off the new calendar year, falling 0:1 to rivals USA in Carson, CA. The 2016 camp and international match are part of Canada’s preparations for the upcoming 2018 FIFA World Cup Russia Qualifiers in March.

USA’s Jozy Altidore scored the lone goal in the international test, scoring in the 90th minute just a few minutes before the final whistle.

The Canadian camp provided the players with a chance to get in shape for the new year and look ahead to the upcoming matches against Mexico in late March.

“I think there were some real positives and we took some steps forward,” said Will Johnson, selected Canada’s player of the match. “It was the first game for everyone here, so lots of guys are just touching the ball for the first time in 2016. The result was not good enough, but we now have time to go back to our clubs (before the Mexico matches).”

Canada will face Mexico on match days three and four in the CONCACAF semi-final round on 25 and 29 March 2016. The first match will be played at home at BC Place in Vancouver, with already more than 32,000 tickets sold for the match.

“We are looking forward to the match at BC Place,” said Adam Straith. “We want to see as many people there as possible. We know how good we can be at home. We’re going to need as many people out there to support us.”

Head coach Benito Floro explained that the team is looking ahead to the official matches, but also always looking to improve at every opportunity that the squad is together.

“Every camp, every day, and every match is a step in the right direction,” said Floro. “We are not worried about Mexico or any opponent, we just have to play our game and attack better offensively.”

Of note in the Canada-USA match, three players made their international debut, with goalkeeper Maxime Crépeau putting in a “very, very good performance” according to coach Floro. Also making their debuts were starter Steven Vitória and substitute Jamar Dixon.