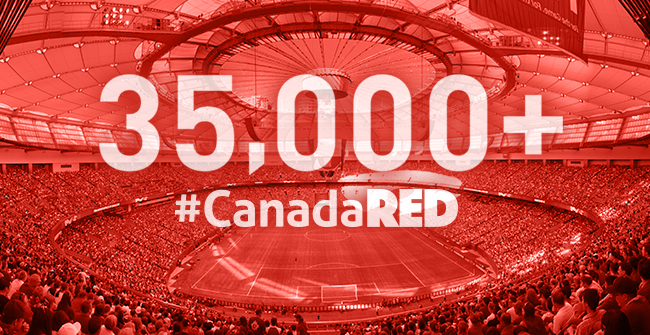 “We want to see a sea of red at BC Place,” said Benito Floro, Canada Soccer’s Men’s National Team Head Coach. “Canada’s support has been excellent everywhere in Canada. What happened in Vancouver in November was marvelous and unforgettable, so we can’t wait for more of the same in March.”

Canada, Mexico, Honduras, and El Salvador make up Group A of the CONCACAF semi-final stage on the road to the 2018 FIFA World Cup Russia™. Mexico leads the group with six points, while Canada is in second with four points after both a home win and away draw in November.

Canada has always performed well against Mexico in the province of British Columbia, with the home crowd always playing a key role. In previous appearances in Vancouver, Burnaby, and Victoria, Canada has always either won or drawn against their visitors. For Friday 25 March, the 35,000+ fans already establishing a new attendance record for Canada Soccer’s Men’s National Team in the province of British Columbia, beating the previous record 20,108 on 13 November for Canada’s 1:0 win over Honduras.

SUPPORT #CANADARED, BE CANADA’S 12th MAN
The Canada-Mexico match promises a memorable atmosphere. With the lower bowl already full, upper bowl seating is available to fans in all three main price points starting as low as $25 (plus applicable fees). The popular ‘Me+3’ offer will remain available in select sections, available directly via Tickmaster.ca by selecting the ‘Me+3’ offer.