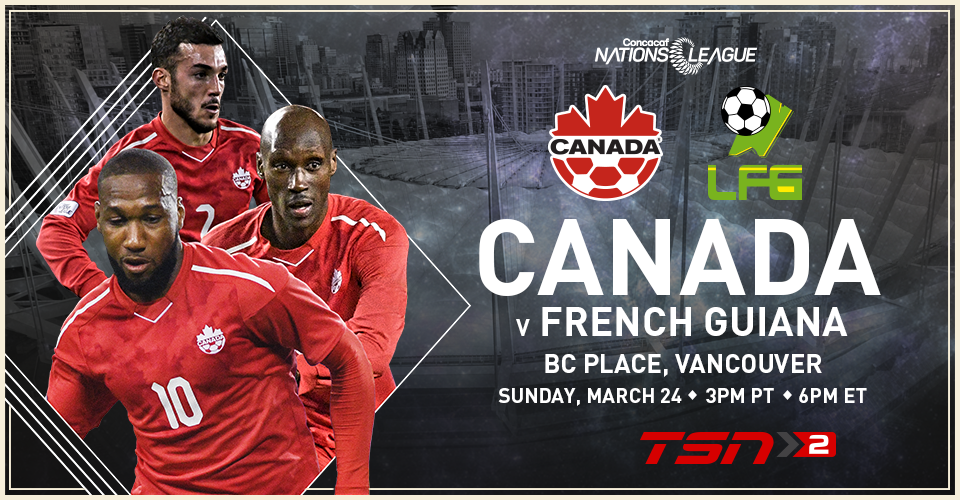 Canada Soccer’s Men’s National Team’s final crucial matchup against French Guiana in Concacaf Nations League Qualifying on 24 March at BC Place in Vancouver will be broadcast on TSN2 and RDS Info at 18:00 ET/15:00 PT.

The decisive match will be produced by MEDIAPRO and signify the first game produced for live domestic and international broadcast by the global media company which recently sealed a long-term media partnership with Canadian Soccer Business (CSB) for Canada Soccer’s National Teams. MEDIAPRO will produce the international feed for Concacaf, the governing body for soccer in North and Central America and the Caribbean, which is distributing the signal to rights holders around the world including Canada.

“Canada Soccer is pleased to have this all-important match featured on TSN and RDS so that Canadian fans can cheer from coast to coast,” said Peter Montopoli, Canada Soccer General Secretary.  “It will be exciting to have this decisive match produced by one of the largest soccer global rights holders and content producers in the world.”

The Canada match kicks off at 15.00 local at BC Place in Vancouver, British Columbia, with tickets available via Ticketmaster.ca or canadasoccer.com/tickets. Alongside watching the match in stadium or on television, Canadian fans can follow the match across Canada Soccer’s digital channels on Facebook, Instagram and Twitter, with additional behind-the-scenes coverage throughout the week-long camp in Vancouver.

A win or draw will be enough for Canada to qualify for the 2019 Concacaf Gold Cup and the 2019-20 Concacaf Nations League Group A, joining already-qualified nations Costa Rica, Honduras, Mexico, Panama, Trinidad and Tobago, and USA.