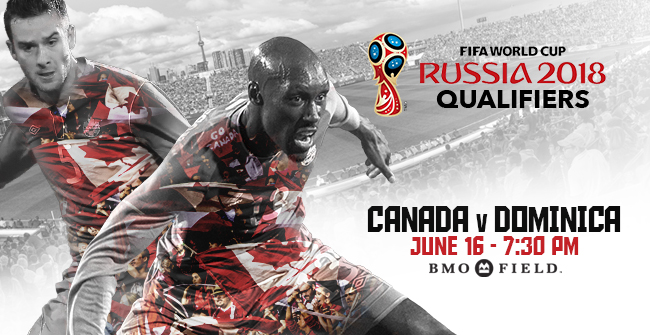 The Canada-Dominica match on 16 June, presented by BMO, kicks off at 19.30 ET from BMO Field in Toronto, ON.

Coming off a strong start to its 2015 campaign, Canada’s Men’s National Team will begin its journey towards the 2018 FIFA World Cup Russia™ in front if its home crowd and look to secure a spot in the next round of the CONCACAF Preliminary Competition when it hosts Dominica on Tuesday 16 June at BMO Field in Toronto, ON.

Canada will first play in Dominica at Windsor Park in Roseau (date and time to be confirmed) before returning to Canada for the return leg of the home-and-away series (match presented by BMO, 16 June at BMO Field, Toronto, ON, 19.30 local). The winner on aggregate will move on to the next round of the CONCACAF Preliminary Competition towards the 2018 FIFA World Cup™.

“We have prepared for this and consider that we are ready to face Dominica in the FIFA World Cup Qualifiers,” said Canada’s Men’s National Team Head Coach Benito Floro. “The single most important thing for us now is to win this qualification and move to the next round.”

Tickets for the 16 June match will go on sale this Friday, 17 April on Ticketmaster.ca and further details can be found on canadasoccer.com/canMNTvDMA.

Ensuring once again that this match is accessible and that fans can gather in numbers to support the team, tickets will be available starting as low as $20 (plus applicable fees).

The Canadian soccer community will once again be able to access discount offers for groups of 10 or more by filling out the online form available on canadasoccer.com/canMNTvDMA.

In addition, this match will also offer a “Me+3” package that allows fans to purchase three Category 3 tickets and receive the fourth one free. The “Me+3” packages can be purchased directly via Ticketmaster.

Finally, South Stand will once more be home to groups of Canadian Supporters, led by the Voyageurs.

Should Canada advance, they would go into the pot for Round 3 home-and-away series of the CONCACAF Preliminary Competition that will take place from 31 August to 8 September, followed by Round 4 round-robin in November 2015, March and September 2016. Match-ups for Round 3 and seeds for Round 4 will be determined at the FIFA World Cup Preliminary Draw on 25 July 2015.

The final round of the CONCACAF Preliminary Competition for the 2018 FIFA World Cup RussiaTM will be contested amongst the remaining countries from the region between November 2016 and October 2017. Ultimately, three teams from CONCACAF are guaranteed places in the 32-nation FIFA World Cup field, with a fourth-place finisher earning a second chance, two-leg playoff against a team from another confederation for the last berth in the field.