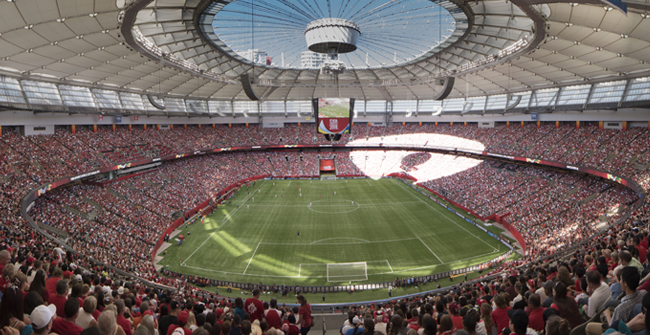 Canada’s road to the 2018 FIFA World Cup Russia™ will again pass through Vancouver, with the proverbial 12th man called to build a fortress of #CanadaRED support

Canada’s road to the 2018 FIFA World Cup Russia™ will again pass through Vancouver, with the proverbial 12th man called to build a fortress of #CanadaRED support. This time, it will be Canada v Mexico at BC Place on Friday 25 March 2016 with kick off scheduled for 19:00 PT/22:00 ET.

Canada Soccer announced today that it has entered into a multi-year agreement with Univision Deportes for all international broadcast rights related to Canada’s Men’s National Team home and away matches through 2018. “We are extremely pleased to have Univision become the official international broadcast partner of Canada Soccer,” stated Victor Montagliani, President of Canada Soccer. “With a strong start in the 2018 FIFA World Cup Qualifiers™ and sitting in second place within our group, we welcome the opportunity for Canada’s matches to be made available to soccer fans around the world.”

“We are proud to partner with Canada Soccer to bring the Canada’s Men’s National Team to our air,” said Juan Carlos Rodriguez, President of Univision Deportes. “This is a testament to our continued commitment to being the true home of soccer for the fanaticos of this global sport. We kicked off this partnership with Canada’s successful match against Honduras, and we are looking forward to the upcoming matches against Mexico and El Salvador.”

Canada’s Men’s National Team is calling upon all fans to get their tickets for the March home match when they go on sale to the general public on Tuesday 15 December, 2015 at 10.00 local (10.00 PT / 13.00 ET). A special pre-sale window will be made available to past purchasers from Tuesday 8 December, 2015 to Monday 14 December, 2015. To help build a sea of #CanadaRED supporters, available ticket options will include designated Supporter sections and products for individuals, Me+3, groups, and hospitality. Tickets will be available online via ticketmaster.ca, by phone at 1.855.985.5000, or in person at the BC Place Box Office. Complete ticket information is available at canadasoccer.com/tickets.

Canada opened its first two games in this CONCACAF semi-final round of Russia 2018 Qualifiers™ with four of a possible six points and is sitting in second place within their group. The home crowd plays a crucial role in FIFA World Cup™ Qualifiers, as evidenced last month when Canada defeated Honduras 1:0 in front of a record crowd of 20,108 at BC Place (the largest crowd for a Canadian Men’s National Team match in the province of British Columbia).

“The crowd was fantastic,” said Will Johnson, whose header was knocked in by teammate Cyle Larin for the lone goal of the home victory. “It was probably the best Canada crowd in front of which I have played in my career. The fans were unbelievable. It was a real treat to come in and see a lot of red everywhere.”

Mexico sits atop Group A with six points. El Salvador is in third spot with one point and Honduras in fourth with zero points. Canada will have home and away matches against Mexico in March before concluding the round against El Salvador and Honduras in September 2016.

British Columbia has provided a strong home field advantage for Canada’s Men’s National Team and Men’s Olympic Team against Mexico in the past. Mexico has yet to defeat Canada in the province, with notable Canadian victories in FIFA World Cup™ Qualifiers (1:0 win in 1980), Olympic Qualifiers (1:0 wins in 1971 and 1983), and the Three Nations Cup (2:1 win in 1990).

In front of a sea of #CanadaRED support, Canadian players will be inspired for the crucial home match.

“Playing an important match at home, in front of your fans and family, I think for each individual this is (the type of match for) which they live,” said captain Julian de Guzman, Canada’s all-time leader in international appearances.