Canada’s Road to Russia continues on Tuesday night as they face Mexico away in 2018 FIFA World Cup Russia Qualifiers, with the match to be broadcast across Canada on both TSN2 and RDS INFO. It will be Canada’s fourth group match in the CONCACAF semi final round, with the second-place Canadians looking to avenge a Friday night home loss to the undefeated Mexicans at fabled Azteca.

“We are going into their home place, so they will have the home field advantage,” said Canadian winger Junior Hoilett. “We will have to keep compact and be hard to break down. We need to try to get a result.”

Mexico leads Group A with perfect nine points, the only one of 12 CONCACAF nations to do so in this semi-final round. Canada trails with four points, following a 1:0 win over Honduras on 13 November, a 0:0 draw against El Salvador on 17 November, and an 0:3 loss to Mexico on 25 March. All four Group A nations will play six matches, with the Tuesday match to be followed by the last two matches in September 2016.

“We will have to fight every second of the game (on Tuesday) and hopefully come away with something on the road,” said Canadian left back Marcel de Jong. “It will be a nice experience at Azteca: it is a pretty impressive and pretty intimitading stadium, but that is part of football.”

After travel on Sunday, Canada trained at Azteca on Monday evening. It was the first time at Azteca for the entire Canadian squad, with Canada’s last trip to Mexico further south in Tuxtla Gutierrez in 2008. Were it not for renovations at Azteca, the stadium could jam as many as 100,000 fans for a home Mexico encounter.

“We look forward to the next game,” said centre back Adam Straith. “We know it is going to be a challenge (playing at Azteca), but there is a good group of guys on our team. We believe that we can get something out of it.” 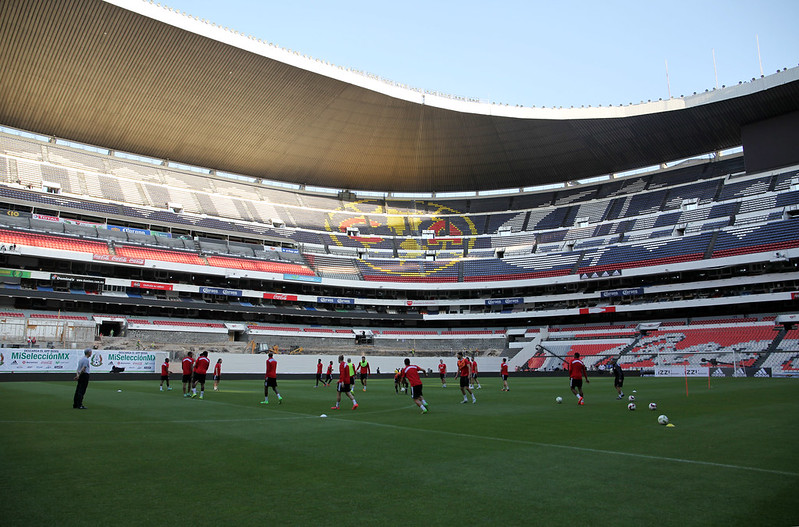 Canada are amongst the 12 CONCACAF nations in the hunt for a spot at the 2018 FIFA World Cup Russia™. The remaining nations have been split into three groups for the continent’s 2015-2016 semi-final stage. The top-two nations in each group will advance to the final round in 2017, from which three nations qualify for Russia 2018 and the fourth team advances to an intercontinental playoff.