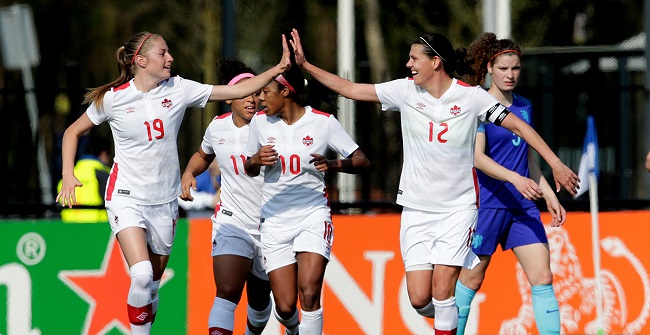 Canada bested the Netherlands 2-1 in its final away International Friendly before returning home to host Brazil for two matches in the final stretch on the Road to the 2016 Rio Olympic Games.

Seeking to continue the momentum Canada built coming off its first Algarve Cup win, Head Coach John Herdman challenged the team to deliver a solid performance and create greater consistency in Canada’s approach, a message the team embraced with zeal.

“I’m really happy with the performance today,” said Herdman. “The Dutch are right up there, they’ve had results against France and Japan recently at home, so we knew it would be tough. What I loved about today is that we looked dangerous and I think that’s what we’ve been pushing this Canadian team to towards.”

Canada opened scoring in the 34th minute with yet another stunning goal from Christine Sinclair. The 162nd international goal for Canada’s captain came off a corner kick from Janine Beckie played straight to Sinclair who was hovering at the top of the box. The Dutch side had little chance as Sinclair drilled the ball into the top of the net.

Beckie made it two nil in the 57th minute, picking up a long pass from behind from fullback Kadeisha Buchanan and crossing in to shoot high over the left side of the outstretched Dutch keeper. The Netherlands responded only a minute later on the return with a goal from van der Gragt, but couldn’t rally back as Canada expertly defended and maintained control of the match.

“A highlight for me was watching how dynamic that front three looked with Sinclair combining with Beckie, and seeing Deanne Rose’s pace,” said Herdman after the match. “We looked threatening and that was the step we wanted to take after the world cup, to go in to an Olympics where teams are really worried about our attack and I think we are building that.”

Canada’s attack was on point throughout the match with several crosses from deep in the Netherlands end and a number of shots taken from the top of the box.

“John challenged us before the game to bring some individual flare to the game and I think we did that consistently,” Sinclair said after the match. “Holland is a very organised team and I thought we made it difficult for them.”

While Canada’s front line was delivering results, the defense was creating all kinds of problems for the Netherlands, and joining up with the attacking front to create chances.

Praising the back line, Herdman noted the pairing of Buchanan and Zadorsky was developing into a great partnership, but he took a moment after the match to give special mention to Ashley Lawrence for her performance at right full back. “That was a standout performance from her today and I am really proud of what she brought to the game,” he said.

Lawrence, who had a big goal against the Netherlands in the FIFA Women’s World Cup Canada 2015™ saw the match as a solid team effort, noting they were doing what they had been training for in the Netherlands and keeping their focus on delivering consistency.

“I think went out today and executed our game plan and everyone brought their top performance from back to front, so I am very proud of our team today,” she said.

Canadian fans will get the next chance to watch the women’s national team live when Canada hosts Brazil June 4th in Toronto and June 7th in Ottawa, as they prepare for the 2016 Rio Olympics.

“We’re very excited to come back home,” Herdman said. “They will be incredible matches. Anyone who’s watched us play against Brazil before know they are the most fiercely competitive games and the Algarve Cup has just heated things up. The fans are going to love it.”

Asked about coming home to play, Sinclair was decisive in her answer.