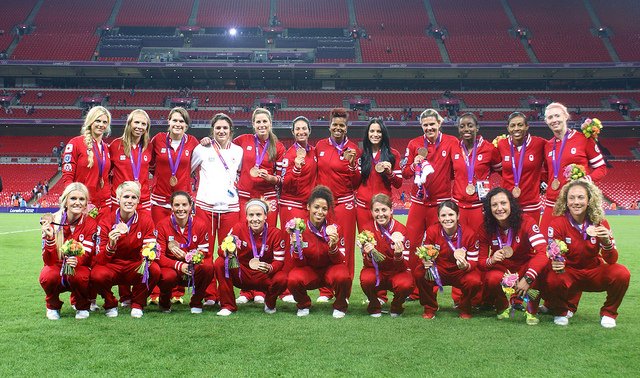 canWNT named Team of the Year at the 40th Canadian Sport Awards.

Canada’s Women’s National Team has been named Team of the Year at the 40th Canadian Sport Awards in Calgary on 17 October 2012.

Canada Women’s National Team inspired the nation when they captured the bronze medal at the Women’s Olympic Football Tournament at London 2012. The third-place finish in a major international “A” competition was the best-ever result recorded in the Women’s National Team program history. It also marked the first summer Olympics medal by a traditional team sport since 1936.

The Canadian Team of the Year award is presented annually to a junior or senior team that showcased an outstanding athletic performance.

“We are extremely proud of the incredible strength, character and courage the Women’s National Team has displayed and that has captured the country’s imagination and inspired the nation,” said Victor Montagliani, President of the Canadian Soccer Association. “We also want to thank the millions of Canadians who have embraced this team and given the players unprecedented support to reach the podium.”

The Women’s National Team was also a finalist in the Spirit of Sport Story of the Year which celebrates a Canadian hero who, in the pursuit of sporting excellence, has demonstrated values such as dedication, perseverance, sportsmanship, respect for others, and a true love of sport, inspiring and capturing the minds of Canadians. The award was presented to Annaleise Carr who, in August 2012, became the youngest girl to ever swim across Lake Ontario.

Established in 1972, the Canadian Sport Awards brings together leaders from the sporting and corporate communities who represent the pinnacle of commitment and competition: Canadian amateur athletes, coaches, sport leaders and volunteers. The annual awards promote sporting excellence across Canada and remind Canadians how sport lifts the human spirit. It is a tribute to the hard work, dedication and victories of our country’s finest athletes. Managed by the True Sport Foundation, the Canadian Sport Awards boasts a strong relationship with its modern day founding partners, which include AthletesCAN, Canada Games, Canadian Centre for Ethics in Sport, and the Commonwealth Games Association of Canada. For more information about the Canadian Sport Awards, please visit www.canadiansportawards.ca.