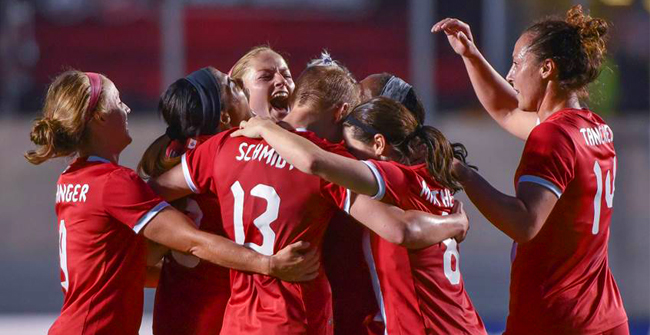 Canada’s Janine Beckie found the back of Brazil’s net in extra time Tuesday night at TD Place, but the team had seemed on the verge of that goal all evening. On a long, high pass from Diana Matheson, Beckie pick off the ball and lobbed it over Luciana, Brazil’s substitute keeper, who had just come into the game. Seconds later the game was over.

“Across 90 minutes, we had threats in the front line, threats in the midfield,” said Beckie, who came in during the 63rd minute. “The players that were on the field prior to us making changes really broke them down and our job as finishers is to come and impact the game and I think everyone that came in the game made an impact.”

Canada had many excellent chances early in the game, including Buchanan in the 18th minute, Matheson in the 23rd and a Sinclair free kick in the 56th.

After falling 2-0 to Brazil in Toronto, the Canadian side refocused and came out with a game plan that involved a more offensive style, including starting Matheson who usually plays in midfield on the front line.

The Canada Soccer Road to Rio home series, against Olympic hosts Brazil, gave Canadians a last chance to catch the team live before they head to the 2016 Rio Olympics for August. Both matches set national team records for attendance, with Toronto bringing in 28,604 fans to BMO Field and Ottawa bringing in 23,568 to TD Place (total attendance of 52,172).

“The fans do make a difference,” said Head Coach John Herdman after the match. “In the first game the players struggled a little bit playing at home, but tonight they certainly got the grips with it and I thought this time it showed what the potential is of this team pushing in to Rio.”

Canada’s Women’s National Team will come together in July for one last home camp before heading to France to play an international friendly in the final stages of Olympic preparations.