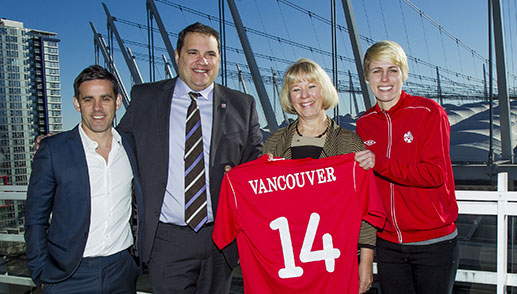 Canada’s Women’s National Team will host two of the world’s most dominant women’s soccer nations in Vancouver in 2014 when it plays Germany, Wednesday 18 June (kickoff 19.00 local) and Japan, Tuesday 28 October (kickoff 19.00 local). Both Women’s International Friendly matches will be played at BC Place.

“To ensure Canada’s Women’s National Team offers consistent, world-class performances, Canada Soccer believes that it must play against quality opponents more often, and play at home on a regular basis,” said Victor Montagliani, President of Canada Soccer. “Vancouver has demonstrated its enthusiasm towards the beautiful game and we are thrilled to bring some of the fiercest opponents international women’s soccer can offer so that our Women’s National Team can experience the support of their home fans again on the road to Canada 2015.”

Tickets for the June match between Canada and Germany will go on sale on Friday 21 February, and will be available starting at $20 (plus applicable fees). Single tickets for the October Canada-Japan clash will go on sale at a later date, but a two-match pack, featuring both the Germany and Japan matches will be on sale on 21 February starting at $36 (plus applicable fees).

In a continued effort to offer the soccer community affordable access to these matches, special group rates and discounted family packs will also be offered.

In addition, purchasers of tickets for the Canada’s Women’s National Team matches in Vancouver will be offered a special opportunity to opt-in to a Priority Access list to purchase venue packs for the FIFA Women’s World Cup Canada 2015™ matches at BC Place when the packs go on sale.

All ticket and event details are available on canadasoccer.com.

These two matches, with the other two announced earlier in the week, form what will be a busy 2014 home schedule for Canada’s Women’s National Team. All Canada’s WNT home matches this year will be broadcast live nationally on Sportsnet.