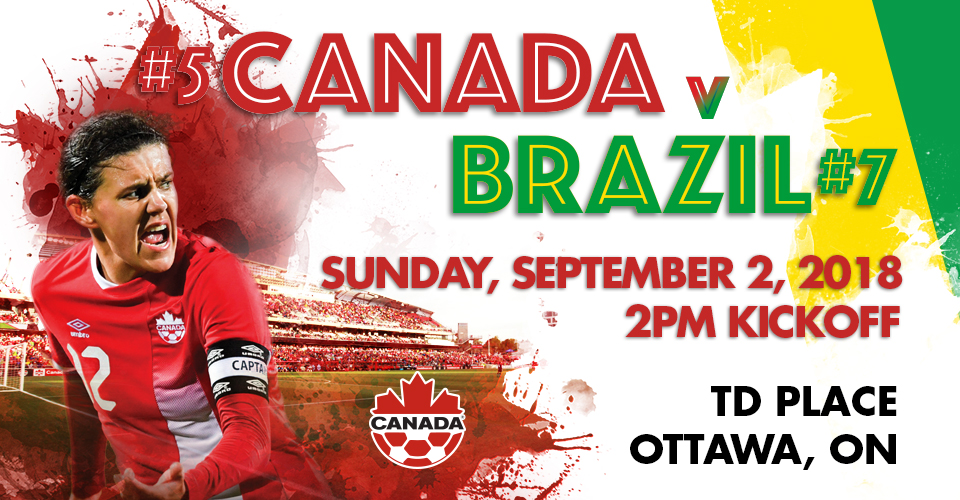 Tickets for the highly anticipated match-up will go on sale to the public this Thursday, 12 July at 10am ET via TDPlace.ca, by phone at 613.232.6767, and in-person at the TD Place Box Office. Tickets to the match start as low as $20 and groups of 10 or more are eligible for discounts of up to 30% off regularly priced tickets. For complete ticket information visit www.canadasoccer.com/tickets.

“Canada Soccer is thrilled to be returning to the nation’s capital with our Women’s National Team to play Brazil, who we faced in the Bronze Medal match at the 2016 Rio Olympics,” said Peter Montopoli, Canada Soccer General Secretary. “Ottawa has always supported this team, as they did in 2016 when over twenty thousand fans came out to send them of to Rio, and we are confident we’ll have an excellent crowd again for this rematch.”

Canada Soccer’s Women’s National Team last match against Brazil saw Canada defeat the home side at Rio 2016 Olympic Games to take the Olympic Bronze Medal.  Canada’s back-to-back podium finishes at the London 2012 and Rio 2016 Olympic Games earned them the distinction of becoming the first Canadian team to win back-to-back Summer Olympic medals since 1908, and the first-ever women’s Canadian team to repeat on the podium. Canada also faced Brazil in Toronto and Ottawa ahead of the Rio Olympics, splitting the series 1-1, including Canada’s send-off final match in Ottawa which saw the home team defeat Brazil 1-0, with Janine Beckie scoring in the 90th minute to secure the win in front of 23,588 fans TD Place.
“Bringing Brazil to Canada for this match in September is an extremely important opportunity for us as we prepare for the Concacaf Women’s Championship in October,” said Canada Soccer Women’s National Team Head Coach Kenneth Heiner-Møller. “Brazil is an incredibly challenging team, with a wealth of talent, so having the opportunity to play them ahead of our FIFA Women’s World Cup™ qualification campaign will give us a good opportunity to test ourselves against another top ten team, while facing an opponent that will bring a different style of play than our most recent European opponents, which is something we expect we will face in the Concacaf Championships as well.”

Since the 2016 Rio Olympics, Canada has played 18 matches, 11 of which have been against European sides, and recorded ten wins, two ties and six losses. Six of those matches have been against teams ranked in the top ten in the world, including a tie against the USA ranked #1 in Vancouver in November 2017.

“Our focus since 2016 has been on playing the world’s top teams as we ready ourselves for the FIFA Women’s World Cup in France next year, but first we must qualify through the Concacaf Women’s Championship tournament, which presents a different set of challenges,” said Heiner-Møller. “We anticipate facing teams with a different style of play and a different level of intensity, so facing Brazil as a preparatory match will give us some good insight into what we need to work on in the final push of our qualification campaign.”

Ticket Information
Individual tickets to the Canada v Brazil match will go on sale to the public on Thursday 12 July at 10am ET / 7am PT via TDPlace.ca, by phone at 613.232.6767, and in person by visiting the TD Place Box Office. Tickets are available in a variety of price points, starting as low as $20 (plus applicable fees). The launch of ticket sales will be preceded by a 48-hour pre-sale for Canada Soccer Insiders.
Group Ticket Discount Offer
Group discounts (10+ tickets) are available for this match, by organizing a group of 10 or more, fans are eligible to receive a discount of up to 30% off regular priced tickets. To submit a group ticket request, complete the group order form indicating the price point and quantity of tickets you are wishing to purchase here: Group Order Form. Ticket orders will be processed on a first come, first serve basis so organize your group, club, or team today.
Premium Seating
Club Seats at TD Place offer fans a premium match day experience featuring complimentary food and non-alcoholic beverages, access to the exclusive club lounge with two full-service private bars, all from some of the best seats in the venue. Visit TDPlace.ca to purchase club seats.

‘Me+3’ Offer
A special ‘Me+3’ ticket offer is available for this match. By purchasing three tickets in Price Category 3, fans will receive the fourth one free. The ‘Me+3’ ticket packages can be purchased directly via TDPlace.ca at the beginning of public onsale on 12 July.
Canadian Supporters
Canadian Supporter Groups will be allocated dedicated seating in the Southwest corner of TD Place in section W. Information about the Canadian supporter sections will be available via the Voyageurs website www.thevoyageurs.org at a later date. Please note that persistent standing will be permitted in these sections.
For complete ticket information visit www.canadasoccer.com/tickets.

About Canada Soccer
Canada Soccer, in partnership with its membership and its partners, provides leadership in the pursuit of excellence in soccer, both at the national and international levels. Canada Soccer not only strives to lead Canada to victory, but also encourages Canadians to a life-long passion for soccer. For more details on Canada Soccer, visit the official website at canadasoccer.com
For our most recent photographs, please visit our Flickr Photostream.
Canada Soccer’s Women’s National Team
Canada recently made history with back-to-back podium finishes at the London 2012 and Rio 2016 Olympic Games, becoming the first Canadian team to win back-to-back Summer Olympic medals since 1908, and the first-ever women’s Canadian team to return to the podium.